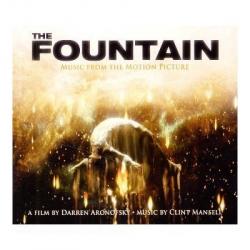 Original Soundtrack to The Fountain

If you’re really looking for independent music stars, you need look no further than the Kronos Quartet. They are the alternative rock stars of the chamber music scene. All the cool kids love them and their avante garde schemes, from collaborating with Chinese musicians like Wu-Man to creating cacophonous tributes to a former FBI chief (“Sing! Sing! J. Edgar Hoover”) to being Philip Glass’ favored musicians.

However, now they are projecting themselves into modern rock (well, depending on how you want to define it), finding themselves working with Amon Tobin and Clint Mansell (formerly of Pop Will Eat Itself). Their collaboration with Mansell comes in the form of the score of Darren Aronofsky’s The Fountain and finds themselves mixing up with Mogwai while they’re at it with surprisingly invigorating results.

Clint Mansell has converted himself from early 90’s rap-dance-rock pioneer of the much-underappreciated Pop Will Eat Itself to the personal composer for Darren Aronofsky, starting with the electronic soundtrack of Pi to his first collaboration with the Kronos Quartet for Requiem for a Dream to a truly movie-score-like album for the sci-fi love story The Fountain. The dark mood of the film is reflected in the somber, dirge melodies created by Mansell, the Kronos Quartet and Mogwai (who fittingly recorded their portions of the score in “the Castle of Doom”).

If you’re looking for uplifting music, this is not the place to start. Instead what you get deep, resonant tones, hushed vocals, scratched and scraped guitar strings and ominous string arrangements that hover over the horizon like a pall of death. What works out so beautifully is the mixing of Mansell’s slow, pained melodies with the string work of the Kronos Quartet. Just hearing the opener “The Last Man,” you know you’re not going to be enjoying a light-hearted romp. Instead the sonorous quality of the Kronos Quartet mimics the hurt of the film (and of course, points out the biggest difficultly of reviewing a score – how do you talk about it as an independent work and surprising, many aspects of The Fountain work well as their own pieces). “Holy Dread!” as the name implies, is a death march if ever you heard one, with pounding kettle drums mixed underneath the resonant cellos and grunted choral work, while “Tree of Life” picks up the pace some and in that sense I mean that instead you feel like you might be getting hunted down by a demon to this music.

Where The Fountain works its best is where all three corners, Mansell, Kronos and Mogwai, all play a part. In those moments, a fury of sorrow seems to be created, reaching into a Dante’s Inferno to pull back out a mix of howling strings, booming drums and mournful melody that meld together perfectly, such as towards the end of “First Snow” or throughout “Death is the Road to Awe” (yes, uplifting titles) where it becomes obvious that these artists were meant to collaborate at some point (and you really wonder how Clint made it from PWEI to here in only a few steps).

The Fountain is not for everyone, it acts much more like a classic movie score than your typical modern rock album, but the moods created by the trio at work for most of the tracks are moving and beautiful. If you need a launching pad to begin to delve into some less rock-oriented artists like the Kronos Quartet, this might be a good place to start – you can comfort yourself in know that Mogwai and Clint are there to keep you company, but you can also sit back and enjoy (well, maybe enjoy isn’t the word as much as be absorbed by) the textured strings of the Kronos Quartet. It is definitely something for which a chance is clearly worth taking.