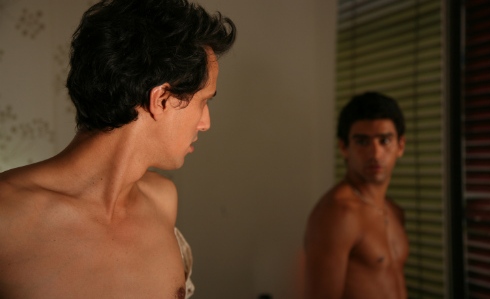 Is it just me or does SIFF seem extra gay this year? There are 29 queer-themed films in the 2010 festival lineup (not that there’s anything wrong with that), and while there’s still a lot of pink crap out there (I’m looking at you, From Beginning to End), it’s been nice to see the genre coming of age and stretching beyond the typical boring “hot guy/girl meets same, make fun of or engage in stereotypes, become healthy gay adults, overcome adversity while proving that love is all that matters” variations. Three of my festival favorites-so-far (Loose Cannons, The Topp Twins: Untouchable Girls, and Undertow) happen to be gay.

If indie/arthouse/foreign films of the same-sex-lovin’ persuasion are your thing, there are still a few left to choose from during SIFF 2010.

We’ll start with the most Logo-friendly (not a compliment) of the bunch, The String {June 5, 9:30p, Egyptian}. It concerns a Paris architect named Malik (Antonin Stahly) who, following the death of his father, returns to his family home in Tunisia, which also houses his overbearing mother (Claudia Cardinale), who in true gay movie-momma style won’t shut up about him settling down with a nice girl. Then Malik meets his mom’s delicious young handyman, Balil (Salim Kechiouche), and you’re a moron if you don’t know what happens next. The film eventually manages to break out of the rut it treads in the first act (a scene with the mom in a testosterone-drenched bedroom around the halfway point really gets things moving in a favorable direction), and for the most part the characters redeem themselves from some rather despicable pre-romance behavior. (Some of said behavior seemed wannabe-Head On to me; that 1998 gem is actually playing earlier in the day 6/5 and is well worth a big-screen viewing.) While a repeated dream / neurosis / metaphor involving the titular string just is not effective, and an abrupt injection of happy in the final reel is borderline too-much, The String does prove to be a sensitive look at class and custom, with some good performances and gorgeous Tunisian scenery. (I want to visit there and find a Balil of my very own.)

I Killed My Mother {June 6, 7p, Egyptian} has even more francophone mom-son drama/trauma. And an inordinate level of screeching, most of it by writer-director-star Xavier Dolan, but I’m willing to cut him a break: he wrote this film when he was just 17 years old, began directing it when he was 20, and won a trio of prizes with it at Cannes last year. Dolan’s character is Hubert, a gay (duh) teen with a big narcissism problem, a ridiculously hot boyfriend, and the strongest set of lungs in Europe. He’s a bit of an asshole, and so is his tacky (single) mom, and together they’re a corrosive mix. Lest you think this is a murder movie, please know that the ‘killing’ is only figurative; it’s one of many fantasies housed in Hubert’s overactive mind. He only seems to see her faults, she has trouble looking past past his bitter criticisms, and their repartee goes from funny banter to razor-sharp bons mots to verbal abuse on a dime. Their interactions are cringe-inducing but feel very honest, so it comes as no surprise when Maman has finally had enough; she and the estranged dad conspire to send Hubert off to a boarding school, which damages their relationship irreversibly — or does it? Young Dolan is a director to watch, and had the runtime come in 20 minutes shorter (15 of that being screeching footage, please) I’d be singing the film’s praises from the rooftops. As it is, I can only give it an enthusiastic thumbs-up.

Undertow {June 6, 11a, Neptune}, one of my favorite films of SIFF 2010, mixes magical realism and telenovela-style drama to glorious effect. The story centers on married papi-to-be Miguel (Cristian Mercado), a fisherman in a small Peruvian seaside village, and his affair with a visiting city-boy artist named Santiago (Manolo Cardona). They meet in secret, get nekkid on breathtaking beaches, and tussle over Miguel’s insistence that the relationship be kept hidden, all under the watchful gaze of conservative tongue-waggin’ neighbors. And then… well, I’d rather let you discover the rest of the plot yourself. (You can read the too-revealing SIFF program description if you’re dying to know more.) Just be aware that a game-changing event around the film’s midpoint takes the characters and the audience in a whole new direction, complete with shocking revelations and a fiercely emotional high that a lesser film would have ended on. I’m sure some will find the final half-hour of Undertow unnecessary; I consider it a triumph of tone and a ravishing meditation on longing. Writer-director Javier Fuentes-León’s World Cinema audience award at Sundance earlier this year was well-deserved; I hope a Golden Space Needle is next for his truly marvelous film.

Lastly, though I haven’t seen it yet I feel compelled to mention Ticked-Off Trannies With Knives {June 12, midnight and June 13, 9:30p, Egyptian}. Doesn’t the title say it all? No? Well here’s a list of the film’s stars: Emma Grashun, Rachel Slurr, Tipper Sommore, Pinky La’Trimm, and Bubbles Cliquot. If you’re not in at this point, this little blurb from the press materials probably won’t convince you but here it is anyway: “Loaded with titillating dialogue, bodacious bods, and extreme violence, this controversial revenge fantasy proves that it takes more than balls to get even.”

Ticked-Off was met with a fair amount of protest (by people who hadn’t seen it yet) ahead of its Tribeca Film Festival premiere this March. (Check out the festival listing’s user comments.) Surely Seattle will understand and appreciate the film for its worthy intention: to be a loving homage to grindhouse/exploitation/trash cinema. I really can’t wait.

This ain’t no RuPaul’s Drag Race. And these aren’t your typical LGBTQIA films.