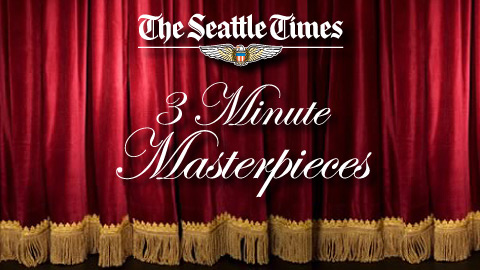 Every year the Seattle Times sponsors a competition for SIFF called “3 Minute Masterpieces,” challenging people to create their own films that run 3 minutes or less. This year they required submissions to be shot on cell phones, a provision I didn’t know about until after I saw the films, and one I wouldn’t have suspected if I hadn’t been told. I’m not entirely sure what that limitation accomplishes, to be honest, because the film quality was pretty darn good for a lot of them. I’d be curious to learn whether the filmmakers themselves approached filming differently than they otherwise would have, but from my point of view it didn’t register.

In any event, the mini-marathonnette of 10 films was terrifically inspiring, even if occasionally puzzling. Some of the films were completely successful, others not as much, and most were perfectly enjoyable, but it was an outstanding reminder that you really can make something interesting and creative without too much more than a few hours and the will to do it. Take the winning film, called “Big Man’s Pride.” Its premise is a very old joke and it looks like the film took longer to edit than it did to shoot—I’d wager principal photography was completed in no more than 2 hours—and since it was a silent film (with interstitial titles and everything!) they didn’t even have to script or ad lib any dialog for the actor. But it didn’t feel cheap or compromised at all. It felt like the filmmakers had achieved very much what they set out to do, and whether they did or not, what they landed on was both charming and hilarious.

My other favorite, “One Lonely Cent,” was a single-take moment in the life of a penny (by the accent I’d guess from New Jersey) trying to talk passers-by into picking him up. Some solid preparation had to have gone into this one, including casting, location, and script (or at least finding a good ad libber), but the narrative could hardly have been any simpler. The camera never even moved. And voila! Good little film! Even the dialogue-free travelogue of one fellow’s journey through India—an opportunity for self-congratulatory self-indulgence if ever there was one—was persistently fascinating. And again, just some dude who took a bunch of videos on his phone and cut them together with some great Indian music. Well worth watching.

Not all of them were as successful—a few seemed to me to be included more for their ambition than for their execution—but I walked away feeling very inspired to just try something. The perfect is the enemy of the good, they say, but watching “The Loneliest Day,” a melancholy little vignette about how sad it would be if your best friend died, it’s really hard not to think “you know, I could probably make a movie."

This is somewhat trickier territory, but I’ll go ahead and argue that the most striking example of what you can do with a little bit of pluck is “Harriet Tubman—The Early Years,” by fourth grader McKenna Taylor. I’d be a lousy person indeed to bag on anything made by an 8-year-old, so please take my word for it that I mean as a compliment that this film was possibly one of the most bizarre 3 minutes I’ve ever spent watching anything in my life, and I’ve seen David Lynch films and also watched Taylor Hicks win American Idol. I think it might possibly be a work of genius. Miss Taylor reenacts several harrowing scenes from Harriet Tubman’s life using, apparently, the dolls she had handy, all of which are resolutely Caucasian. Her narration is animated, but ultimately very matter-of-fact. The juggling my mind had to do to reconcile what I was seeing with what she was describing—and I’m not being facetious—highlighted the brutality of the story more jarringly than a literal reenactment could have done, and it’s really stuck with me, days later. It would have been easy to include this submission from a well-meaning but condescending sense of boosterism (“Good job, little girl, for using your mommy’s camera correctly!”), but I think she (probably even more than she intended, though what do I know) created something genuinely affecting and compelling.

So dudes, go out there with your cameras and try something. See what happens. I’ll even give you a quick list of things I learned from watching 10 of these suckers in a row:

1. The soundtrack will do more to make or break a 3-minute film than almost anything else you can bring to it. Lousy music makes your movie seem lousy, even if it’s really pretty good. Good music can make an almost incomprehensible premise (not naming any names here) feel like an interesting ride.

2. No room in the history of movies (with the possible exception of Alexander Payne’s oeuvre) has ever actually looked like a room in your house, or probably anyone’s house you know. Just something to keep in mind, because it can be more distracting than you’d prefer. Take it outside if you can.

3. Acting is surprisingly hard. Acting without speaking is way, way harder than it looks. Unless you know a pro (or a natural) try not to make your story rely on someone looking pensive.

4. Don’t forget about animation, even if you’re not “an artist.” It’s more time consuming, but you can have a lot of control.

5. “Dying is easy, comedy is hard.” True. But for a short film, you’ll probably get more bang for your buck if you go for a laugh. You can always make something deep and sensitive when you have some practice.

You can see all 10 finalists (including the two winners) at the Seattle Times.