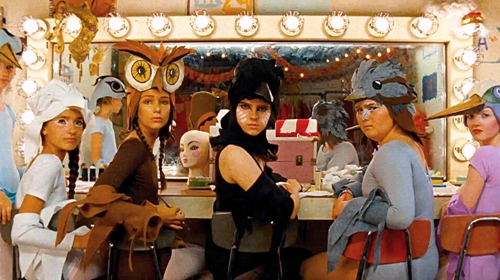 One week remains of this year's movie gorge-fest — which means if you have access to Seattle (or Kirkland) screens and you haven't yet partaken in the cinematic gluttony, it's not too late. Here's the intel on six films to see, three to avoid, and five to consider, all screening during SIFF 2012's final full week (6/4 – 6/10):

{screens June 7 at 7pm at the Uptown, June 9 at 2pm at Pacific Place}
Dark, absorbing, ferociously visual Dutch flick about two very attractive deaf post-adolescents who fall hard for each other and — rebelling against their parents' various encroachments on their lives, of course — cook up a plan to run away together. The leads' performances, the atmospheric handiwork, and the not-quite-linear storytelling are spot-on in the most purely sensual film I've seen in quite a while.

Countdown
{screens June 2 at 6pm and June 4 at 3pm at the Uptown}
This Korean pulse-pounder asks the viewer to take many leaps of faith; I suggest you strap in and just go with it. The wild yarn commences with a badass debt collector who finds himself with terminal cancer and 10 days to live. (Remember what I said about the leaps of faith? Keep reading.) He seeks out a liver-donor candidate with issues and drama and action-movie potential of her own, and endeavors to keep this potential savior safe. The ticking clock charges the film's first half with breakneck narrative thrust, and a midpoint revelation adds unexpected emotional depth to the proceedings; by the (unnecessary) tear-jerkin' final coda you realize you've ended up with a completely different film than you began with. Countdown is all over the place, but wow, it works.

Guilty
{screens June 4 at 9:30pm at the Harvard Exit}
Devastating French bloodboiler based on the memoir of Alain Marécaux, who, along with his wife, was wrongfully accused of involvement in a child sex ring in 2001. This is certainly not a feel-good film — we see Marécaux endure the effects of false testimonies, horrific legal blunders, and several years of incarceration before he gets a proper day in court — but the first-person travails pack this account of one of France's greatest judicial scandals with a shattering punch.

Hello I Must Be Going
{screens June 8 at 6pm at Pacific Place, June 9 at 3pm at the Harvard Exit}
Thirtysomething sadsack Amy (Melanie Lynskey), newly jobless and husbandless, reluctantly moves in with her high-achieving parents (Blythe Danner and John Rubenstein); an unexpected guest arrives arrives in the adorable form of her dad's client's 19-year-old son (Christopher Abbott, aka Charlie of HBO's Girls), and what follows is alternately charming and squeamy. The cast is wonderful and the Laura Veirs soundtrack is perfect for the material. A few silly, shticky missteps in the final third threaten to knock the story of the rails, but in the end the film's many charms win.

Moonrise Kingdom
{screens June 5 at 7pm at the Harvard Exit}
Wes Anderson's new film — about troubled twelve-year-olds Suzy and Sam, who conspire to run away from their respective homes, and accordingly turn a New England island community upside down — has many of the auteur's trademarks: it's drolly deadpan, visually controlled, and frequently wonderful. Whenever and however you see it (the single SIFF screening or in general release beginning June 8), be sure to stick through the closing credits for a perfectly thematic tribute to composer Alexandre Desplat. Delightful.

Welcome To Doe Bay
{World Premiere. Screens June 3 at 9:15pm at the Egyptian, June 5 at 9:30pm at the Uptown}
This nicely-assembled, big-hearted documentary on the adored Orcas Island music fest features some astounding performances by the likes of Champagne Champagne, The Maldives, Damien Jurado, Pickwick, and Campfire OK. I personally have never sipped the Doe Bay Kool-Aid and therefore I must report some major PNW hippity-earnestness going full tilt here — depending on your state of mind and your frame of reference you could very well think you're watching Portlandia at select moments. (There's a communal makeshift Slip-n-Slide, OK?) But being a TIG reader you'll surely find a lot to enjoy in the sounds; Champagne Champagne's segment alone is worth the time and ticket.

{screens June 1 at 9:30pm at the Harvard Exit, June 6 at 4pm at Pacific Place}
A lovesick indie singer-songwriter (director Ryan O'Nan) big on melancholia and short on cash reluctantly agrees to a spontaneous cross-country 'tour' with a delusional self-proclaimed musical revolutionary (Michael Weston) who wants a taste of the traveling-band life. A character encountered on the road describes their sound as "The Shins meets Sesame Street", and he's kinda right: the music charms and sometimes even delights. But the superfluous, patchworky story around the performances offers little in the way of magic.

My Dad is Baryshnikov
{screens June 6 at 7:30pm at Majestic Bay, June 7 at 6:30pm and June 9 at 1:30pm at the Egyptian}
End-of-Soviet-era adventures of an awkward but feisty mid-'80s ballet-academy student named Boris who believes (or maybe just pretends) that his father is breakout dancer Mikhail Baryshnikov. A fun, spirited setup eases into a rather broad story that loses steam in its final third as Boris's growing pains reveal the limitations of the actor portraying him. Still, the film mostly works as an appealing confection.

Starbuck
{screens June 1 at 6:30pm and June 7 at 9pm at the Egyptian}
A middle-aged Québec fuckup named David is confronted with a class-action lawsuit launched by 142 of the 500+ twentysomethings who resulted from 600+ sperm donations (!) way back when. I have a lot of affection for this movie — it's very touching to see David seek out these kids on the downlow and help them out in small My Name Is Earl-style ways. But the frustrating broadness, often flat-out ridiculousness, and, come on, the premise alone, keep Starbuck from my full endorsement.

The Standbys
{screens June 2 at 5:30pm at the Uptown, June 4 at 4pm at the Harvard Exit}
This short-n-sweet documentary peeks backstage at three Broadway performers who've worked as standbys — actors who don't have a minor regular role in a major production (as understudies do), but who must be ready to fill in for an absent star on a moment's notice. Two of the performers are very likeable, and the film is put together well, despite a few squeamy musical numbers staged specifically for the project. But with the 75-minute runtime, they're no dealbreaker.

Thale
{screens June 7 at 4:30pm and June 9 at 9pm at the Uptown}
Leo and Elvis, working for a crime scene cleaning service, are shocked to discover a naked young woman while on an especially grungy assignment. She turns out to be Thale (pronounced TALL-uh) — a seductive forest nymph out of Nordic folklore — and the hapless guys are confronted with forces both human and not-so-human that want to get her. Even at a short-n-sweet 77 minutes this gruesome and often flat-out ugly Norwegian horror yarn is draggy at times, but it offers some good gotcha scares if that's your kind of thing.

{screens June 7 at 6:30pm at Pacfic Place}
British sci-fi romcom about a manchild who believes he's an intergalactic alien, and that he must find a human girl with whom he can travel through a wormhole and propagate his dying species. Or something. The eccentric and seemingly delusional hero is a bit like the Mark Duplass character in (the much better) Safety Not Guaranteed, but Earthbound's broad, silly story and irritatingly obtrusive soundtrack ultimately keep it from approaching orbit.

Prime Time Soap
{North American premiere. Screens June 4 at 6:30pm and June 5 at 4pm at the Harvard Exit}
Disappointing Brazilian drama in which a maid, a prostitute, a diplomat, and a gay teenager live their lives through the euphoria of a disco-themed telenovela during the late-'70s military dictatorship. For a movie that seems to revere novelas, it sure takes its time getting to the trash: potentially interesting characters muck around so long that we don't get to know them as well as we could've if they'd shown any sense of urgency about, well, anything. And after the draggiest setup ever, the big final showdown — which should be nasty fun but sadly is not — feels hollow and unearned.

White Camellias
{World Premiere. Screens June 7 at 6:30pm at the Harvard Exit, June 9 at 4pm at Pacific Place}
A once-celebrated artist (Cybill Shepherd) spends the day with her sycophant assistant (David Burtka) prepping and fielding cancellations for a Spain-themed dinner fête complete with camellias, paella, Federico Garcia Lorca poems, etc. This is not a good film, and I actually tried for a minute, in an attempt to find some kind of camp enjoyment, to trick myself into believing Cybill was playing Martha again. This only worked until the few remaining party guests, each either an asshole or a dud, showed up. My advice: RSVP with regrets.

Next Friday I'll share my thoughts on the closing night selection Grassroots and post a few last must-sees for SIFF's final weekend. See you in queue!