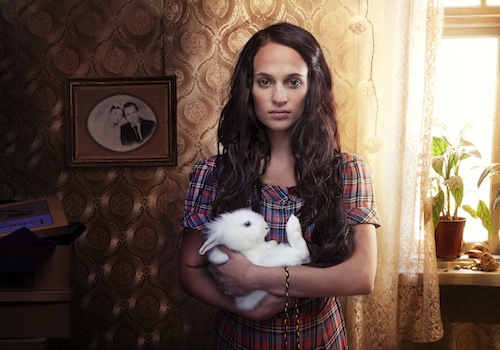 In a small Swedish town, two fathers wait in a hospital delivery room for news of their children’s birth. From that moment on, a boy and girl are linked despite the financial gap in their families. Frangancia Frenandez, whose father is a poor inventor convinced he can chemically recreate gold, and Richard Persson, whose father’s wealth and power rules the town.

As they grow up, Richard develops an obsession with Frangancia, who (sadly) does everything just a little bit better than he does, including playing hockey. Enter Peterson-Jonnson, who attracts attention on the ice—and wins Fragancia’s heart. As Mr. Persson ups his cruel behavior towards his son, Richard’s mind deteriorates further leading up to frightening mix of creepy, misguided behavior that includes the disappearance of Frangrancia’s little brother Jesus.

Told in flashback, The Crown Jewels is a twisted, modern fairy tale with lush imagery so gorgeous, it will take your breath away. Both Amanda Jenegren and Alicia Vikander rock the part of tomboy’ish Frangancia as a teenager and a young woman, and Jonathan Bokman and Bill Skarsgard (another genetically-perfect offspring of Stellan)’s expressions convey the million and one emotions Richard is feeling every minute.

Despite a few moments of extra cheese near the end, I really loved this film. Recommended for filmgoers who love dreamy romanticism mixed with murder mystery—and uh, gazing at beautiful Swedish people.