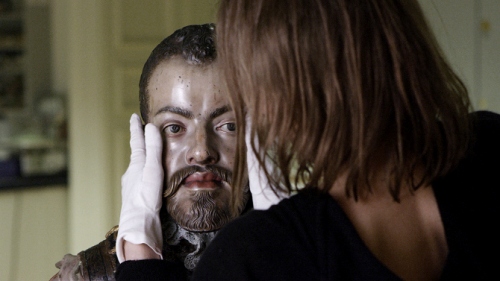 The end of this year’s cinema mega-thon is nigh, and if you’ve slacked on your SIFFage there’s still time to do something about it. Here I present to you seven sure-fire hits that I personally guarantee will provide you some major cinematic enjoyment, all unspooling (digitally) over the next few days.

La Mia Classe
{North American premiere. Screens June 7 at 8:30pm at the Uptown, and June 8 at 4:30pm at the Harvard}
A group of aspiring Rome-based immigrants take a mandatory Italian language class and encounter shared grief, social integration, and humanity. This is actually a movie about itself – the students are real, the teacher is an actor, and we see fourth-wall ruptures via shot setups and off-script developments that inform the third act. Do see it, and when you find yourself unsure of what’s fiction and what (if anything) is not, don’t worry: it’s all saying the same thing, and the point is a profound one. Director Daniele Gaglianone is scheduled to attend these SIFF screenings, and I wonder if Q&A sparks will fly here like they did in Venice.

Life Feels Good
{screens June 6 at 7pm at the Uptown, June 7 at 10:30am at the Harvard, and June 8 at 6:15pm at Pacific Place}
Dawid Ogrodnik turns in a miraculous, go-for-broke performance as Mateusz, a man with cerebral palsy who yearns to be understood by his family and friends. Advanced-level visual storytelling does an amazing job of conveying the intense frustration that accompanies an inability to make one’s thoughts known – especially when life gives the opposite of what’s hoped for. Marvelously sublime moments throughout make it easy to see why this very sweet film has captured the imaginations of festival audiences around the world.

The Little House
{screens June 8 at 6pm at the Uptown}
Sweet, sad, nostalgia-rich melodrama based on a popular Japanese novel about a country girl named Taki, her life as a domestic in Tokyo from the late ‘30s to early WWII, and a present-day descendant putting together outlying pieces of her story. Thematically and tonally very similar to Miyazaki’s final film The Wind Rises (both were scored by uber-prolific composer Joe Hisaishi), it’s further evidence that director Joji Yamada has much more up his sleeve than a great Samurai trilogy and Tora-san trash. Another excellent SIFF 2014 endnote option for those not going to Closing Night.

Medeas
{screens June 5 at 7pm at Pacific Place, and June 6 at 4pm at the Harvard}
Maria Full of Grace‘s Catalina Sandino Moreno is very good here in the role of a deaf, restless farm wife. She’s done the worst job ever covering up an affair with a (hot) nearby gas-station attendant (Kevin Alejandro), and her dairy-farmer husband has been too shortsighted to notice the obvious – until she announces a sixth addition to the brood. This is a quiet, nicely observed film with unexpected moments of alternating gorgeousness and terror; if you’re in the mood for a good feel-bad film, here you go.

To Be Takei
{screens June 6 at 7pm at the Egyptian, and June 7 at 4pm at the Uptown}
George Takei’s journey has been filled with the unexpected, rom a childhood scarred by internment during WWII to Star Trek to online awesomeness. This crowd-pleaser of a doc provides fun glimpses into the public and private lives of the icon and his business-side-of-things husband, Brad, who is amusingly not really into the whole documentary idea. He’s one of many pro-Takei interviewees, the likes of which include none other than William Shatner, who speaks and is spoken about, and who comes out smelling like… well, an asshole.

10,000 KM
{screens June 5 at 9:30pm at the Harvard, and June 6 at 4:15pm at Pacific Place}
An intimate and insightful hetero-romance drama, freshly visualized. It begins with a very impressive 25-minute single shot in the Barcelona apartment of (hot) couple Alex (Natalia Tena) and Sergi (David Verdaguer) nearing the end of some (hot) sexytime, and through a tense discussion about a turning point in their lives; we don’t see them in the same room together again for quite a while. In the meantime we spy on their (hot, at first) Skype calls, emails, Facebook posts, Google Earth lookups, and Alex’s photos of Los Angeles, where she’s accepted a one-year gallery residency. Interesting way to reveal the pair’s fraught, long-distance narrative, and it all seems very now – but only for the moment, of course.

Dear White People
{screens June 5 at 7pm at the Harvard Exit, and June 7 at 3:30pm at Pacific Place}
This School Daze-y satire about racial tensions at a fictional Ivy League university centers on Sam (Tessa Thompson), militant host of a hot-button campus radio show that gives the film its title; Troy (Brandon P. Bell), her aspiration-laden, non-threatening golden-boy counterpart; Coco (Teyonah Parris), their wannabe rival in social-media domination; and Lionel (Tyler James Williams), a gay student observing it all from the sidelines. A certain smugness at times detracts from the film’s confrontational vibrancy, and very few of the romantic entanglements ring in any way true. An otherwise well-observed film that’s often fun, and would have been more so with a 20% shorter runtime.

First Snowfall
{screens June 5 at 4pm at Pacific Place and June 6 at 6:30pm at the Uptown}
This frequently pretty but uneven Italian Alps-set film follows Dani, a refugee from Togo, as he enters (and of course changes forever!) the lives of his elderly employer’s broken family. With its unearned moments of jubilation, pokey pacing, and broad emotionality, First Snowfall drifts and drifts, at last landing firmly in SIFF’s ever-popular “just ok” category.

Manuscripts Don’t Burn
{screens June 8 at 7:30pm at the Harvard}
Iranian filmmaker Mohammad Rasoulof defied a 20-year ban on filmmaking to tell the horrifically true story of two government assassins tasked with eliminating dissident writers and intellectuals. The result is a slow, quiet, angry film – one that deserves to be seen based on its creator’s pedigree alone. But it’s at least 15 minutes too long, and a few of the more drawn-out sequences have the effect of exasperating the viewer, icing down a powerfully scalding critique of corruption.

West
{screens June 7 at 6pm and June 8 at 11:30am at the Uptown}
In 1975 East Berlin, Nelly and her son Alexei escape to West in an effort to start fresh three years after Alex’s father has gone missing. It’s great to see Jördis Triebel, who plays Nelly, in a lead role again – I still think of how amazed I was by her pitch-perfect turn in Emma’s Bliss way back during SIFF ’07. And scenes in the film’s first half – dealing with final degradations in order to get out, jumping through bureaucratic hoops to settle into a refugee center in the West – are great. But the narrative loses steam as Nelly’s paranoia and Alexei’s irksomeness begin to wear thin.