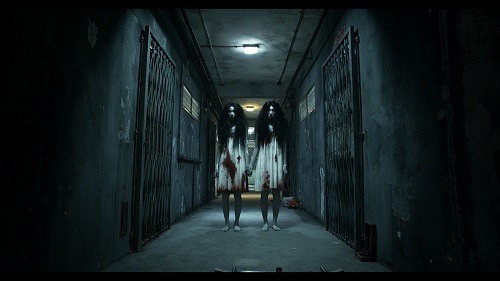 {Rigor Mortis opens in Seattle on Friday, 6/6, and is screening at AMC Pacific Place}

I was pretty psyched to watch Rigor Mortis (especially since I’d just missed it at SIFF), mostly because I knew that Takashi Shimizu was involved as a producer, and I love all incarnations of his Ju-On films—including the American remake that he also directed—beyond any acceptable level of reasoning.

What I didn’t know, and probably should have going in, is that Rigor Mortis is actually one big in-joke, specifically related to the 1985 horror-comedy Mr. Vampire (which I have never seen). Mortis shares several actors with Vampire, and makes reference to both the hopping vampire at its center and the priest who’s tasked with stopping him.

Watching it without that lens, I wasn’t sure exactly what was going on—only that it was a LOT, and I wasn’t sure how any of it was connected. Chin Siu-Ho is essentially playing himself, an aging actor famous for horror flicks, suffering from depression at the loss of family (death? divorce? I couldn’t quite make out which) who moves into the creepiest apartment complex EVER. Hold up, can we just talk for a second about how no sane person in any Asian horror film would ever move into any mansion, house, apartment, or shack? Ever? WHYYYYYYY do they always look so scary?

The apartment, as is turns out, is haunted by a pair of twin sister ghosts who crawl around with insanely bent limbs and a never-ending trail of blood tendrils surrounding them, and they like to party by possessing people (namely, Chin Siu-Ho). So there’s that, and then there’s also a retired vampire hunter who uses his large stockpile of glutinous rice to cook with since there are no vampires to fend off with it. Yes, with the rice. Rice + Chinese vampires don’t mix, apparently. EXCEPT THAT there is actually a weird no-eyed child vampire running around with a crazy-scary gaping mouth, who’s apparently watched over by a priest who also likes to turn dead people into hopping zombie-vampires that need virgin blood. WHAT IS EVEN GOING ON?

The only thing I know for sure is that a whole lotta gore was going on, which is rad. But it was a whole lotta computer-generated gore, which is not so rad. It gave the whole movie the feel of a video game. Aka: I like a little more practical F/X in my F/X, if you know what I mean. And I think you do.

I enjoyed it well enough, especially when the last few minutes kind of flipped the script and made me go, “ohhhhhhhhhhh. I GET IT! Maybe? Wait…” but fans of Mr. Vampire and the whole hopping vampire phenom will likely find it a much more interesting ride.