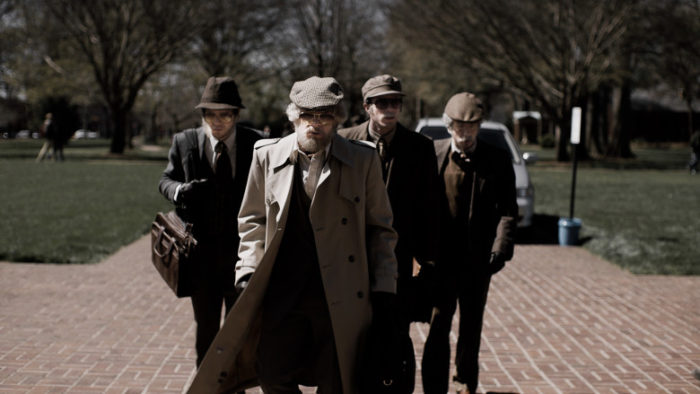 Here we go again! Our annual celebration of cinematic overconsumption arrives tonight with The Bookshop – the beginning of a 25-day long-haul. And even if you’re not into the whole opening night soiree situation (I am really not), there’ll be plenty more to feast your eyes and ears and emotions on before the cinematic smorgasbord unspools its final reel (or, more likely, projects its last digital file) on June 10.

Because if there’s one good thing the big bloated schedule offers, it’s plenty of filmic wonders for us all to choose from. I’m glad to report that of the films I’ve seen so far, the good ones far outnumber the awful. Here are some mini-reviews for eight features to seek out, one to avoid (yes, only one so far!), and two to be cautiously optimistic/pessimistic about, all screening at some point during the festival’s first full week (May 18-24).

American Animals
{5/19 9p Uptown; 5/20 1:30p Pacific Place}
Filmmaker Bart Layton serves another startling, compelling docu-drama hybrid, this time about actual events surrounding a rare-book heist 15ish years ago in Kentucky. The film doesn’t offer the jaw-drop astonishment factor of Layton’s other notable entry in the franken-genre (The Imposter, a SIFF 2012 fave), and it’s at least 15 minutes longer than it needs to be. Perhaps the biggest surprise for me is that it’s ultimately more moving than exhilarating: the final frames had me in tears.

Ava
{5/23 6:30p Lincoln Square; 5/24 3p Uptown}
A petty overreaction follows a minor infraction, and Iranian teenager Ava is forced to take a humiliating medical exam to prove her virginity. A fierce, long-overdue rebellious streak is unleashed, along with truth-to-power confrontations that startle and thrill. Based on her own experiences, Sadaf Foroughi’s unflinching, deliberately-paced, wonderfully observed debut is a harsh critique of gender inequalities in a claustrophobic society.

Hot Mess
{5/18 6:30p Pacific Place; 5/19 3p Majestic Bay; 5/26 8p Shoreline}
I’m sure you’ve known messier hot-messes than 25-year-old Loz, the budding playwright and college dropout at the center of this Australian comedy. An apparent upswing in Loz’s dating life may or may not translate to a boost to everything else she’s failing at, and watching Oz comic Sarah Gaul in the role – usually somewhere between halfhearted striving and indifferent resign – is squirmy fun. Hot Mess is not a laugh-a-minute, but it’s amusing in its darkly deadpan, improv-heavy, mumblecore-y way.

The Last Suit
{5/23 7p Uptown; 5/25 4p Egyptian; 6/3 6p Kirland}
Sweet gem of a movie about a gruff, cranky 88-year-old tailor named Abraham, played beautifully by Argentine actor Miguel Ángel Solá, who leaves his Buenos Aires home for a one-way trip across Europe to reconnect with the man who saved his life after Auschwitz. The plot partakes in quite a few “scrappy road trip in search of…” sub-genre tropes, but the film’s performances – especially the central one, rough by design, imbued with longing – ultimately help give the material a tidily-stitched finish.

Looking For?
{5/21 7p Pacific Place; 5/22 4:30p Pacific Place}
Following a tough breakup, Taiwanese filmmaker Chou Tung-Yen started using dating apps… to find interview subjects for a documentary about seeking potential hookups or life-partners (or, in some cases, just conversation pals) online. The title refers to that inevitable dating profile question that doesn’t always have a simple answer, and the interviews feature wide variety of gay men – numerous backgrounds, cultures, ages, body types – who shared their stories over several years. As great as some of the subjects are, the real charm of Looking For? is witnessing Chou – not yet a seasoned filmmaker by any stretch – stumble into his earnest, enlightening, uplifting creation.

Revenge
{5/18 midnight Egyptian}
A young woman’s romantic weekend getaway to her wealthy boyfriend’s desert estate turns very ugly indeed when she’s assaulted by an unexpected visitor. I won’t give much away about what follows – I mean, you see the title of the film, right? – except to say it’s a stylish jubilee of carnage and luridness. And, as with all great horror films, there’s more beneath the blood-soaked surface(s): debut feature writer-director Coralie Fargeat has crafted a nasty piece of work that subverts the revenge-thriller genre, effectively maintaining an atmosphere of discomfort within a variety of hells.

That Summer
{5/21 9p Ark Lodge; 5/29 6:30p Uptown}
Composed almost exclusively of 16mm footage shot in 1972 and lost until only recently, Göran Hugo Olsson’s winsome thrill of a documentary recounts the summer when Lee Radziwill and photographer Peter Beard (whose oral history frequently serves as narration) decided to record Radziwill’s reclusive aunt and first cousin, Big and Little Edie Beale themselves. Radziwill hired Albert and David Maysles to help shoot in and around the Beales’ crumbling, raccoon-infested East Hampton mansion as attempts were made to bring the property up to code. (The brothers would return later to make their 1975 classic Grey Gardens.) Even if you have only a casual interest in the Beales, Little Edie’s rendition of “My Adobe Hacienda” is alone well worth the time and ticket. And if you’re a Grey Gardens fan, this film – a glorious lost chapter – will give you life.

Tigers Are Not Afraid
{5/18 9p Ark Lodge; 5/30 9:30p Uptown}
Marvelously-crafted film about a (very allegorical) Mexican town held hostage to a brutal drug war, and an orphaned girl whose supernatural visions lead her to an alliance with a gang of street boys. The film’s visual storytelling moves us shockingly yet seamlessly back and forth from spooky (spectral creatures manifested from darkness) to just plan horrific (guns turned on children), and will hopefully get director Issa Lopez the international recognition she deserves.

Gold Seekers
{5/19 1:15p Egyptian; 5/29 7p Uptown; 6/3 8p Uptown}
Often quite fun, but ultimately just shy of satisfying, this buried-treasure flick from Paraguay is referred to in SIFF’s program notes as “National Treasure meets The Goonies“. Enjoyment levels will vary accordingly. There are crumbling treasure maps, zippy street chases, nicely-rendered observations of culture and class matters, and a very interesting visual metaphor involving rising waters that repeats appropriately from setting to setting. The material doesn’t quite reach depth beyond that of a good-natured and worthwhile diversion that never truly achieves its high-octane heist-thriller potential.

Queerama
{5/23 9p Ark Lodge; 6/1 1p Uptown; 6/6 9:30p Uptown}
Short-n-sweet documentary in which a century of LGBTQ representation in UK pop culture is illustrated through a supermix of vintage film and TV footage. Filmmaker Daisy Asquith gained unprecedented access to the British Film Institute archive to produce a mega-melange that’s at turns shocking, intoxicating, and very funny. The footage has such power and poignancy that the overbearing, on-the-nose nature of some of the soundtrack’s overlying songs – the John Grant stuff in particular, and gawd there’s a lot of it – threatens to diminish the overall effect. But a sexytime montage set to Goldfrapp’s “Ooh La La” works beautifully.

Streaker
{5/22 9:30p Uptown; 5/24 4:30p Pacific Place; 5/28 8:15p Shoreline}
Broad, silly, infrequently entertaining Swiss comedy about a desperately cash-strapped teacher (named Balthasar; he goes by, um, Balz) who enlists his bookie/barber to help take sports betting in a new direction: instead of standard wagers on the outcomes of soccer matches, they begin collecting bets on the length of time streakers can stay on the field. Did I mention the teacher’s name is BALZ? Because there are quite a few dangly Euro-bits on butt-nekkid display in this film. But said bits don’t make Balz’s harebrained tedium – or the story’s unsatisfactory treatment of its female characters – any less exasperating.