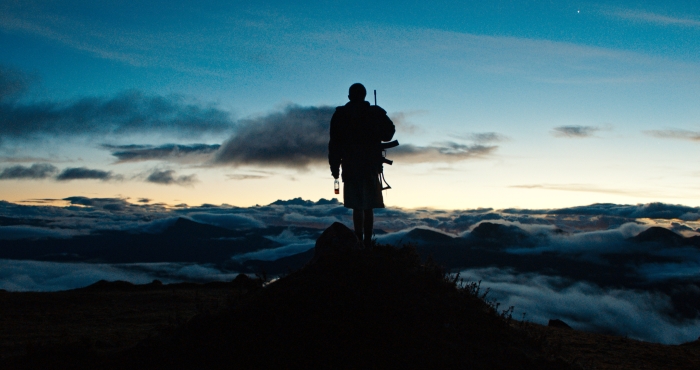 Our annual celebration of cinematic overconsumption strikes again tonight with Lynn Shelton’s Sword of Trust (details below) – and, as always, there’ll be plenty more to feast your eyes and ears and emotions on before the cinematic smorgasbord comes to a close on June 9.

If there’s one good thing the big distended schedule offers, it’s the broad array of wonders for us all to choose from. I’m glad to report that of the films I’ve seen so far, the good ones outnumber the awful, or even the so-so. Here are early takes on a baker’s dozen features – eight to see and five to be cautiously optimistic/pessimistic about – all screening at some point during the festival’s first eight days (May 16-23).

Another Day of Life
{5/20 9:15p Uptown; 5/22 4:30p Uptown}
It’ll take a lot to match Tower in the “rotoscope animation documentary hybrid” subgenre, but this film – about the devastation of the 1975 Angolan civil war, based on journalist Ryszard Kapuscinski’s book – comes close. Astonishing visuals from new and archive media sources – animation, talking-head interviews, b-roll, archive footage, Kapuscinski’s photographs – balance out some overripe English-language voice performances in the rotoscope segments. All fitting for a subject whose work so keenly demonstrated the brutal power of imagery.

Between the Lines
{5/21 6:30p Uptown}
Return (or take an archival visit) to a time when the media were analog, when alt-weekly print publications were viable, when Bruno Kirby was actually kinda hot. This 1977 dramedy, screening at SIFF in a new 2k restoration, follows a Boston-based underground newspaper as it battles a takeover by commercial forces. As corny and rambling and stilted as it often is, Between the Lines is a must-see for the cast alone: Jeff Goldblum, John Heard, Jill Eikenberry, and Marilu Henner appear in early roles, alongside a host of character actors you’ve been seeing for decades in movies and shows.

Cold Sweat
{5/21 6p Uptown; 5/26 6p Lincoln Square}
This based-on-reality drama follows an Iranian futsal (indoor soccer) champion, Afrooz, who finds herself unable to travel to the tournament finals – the biggest match of her life – without her husband’s permission. Unfortunately for Afrooz, they’re in the middle of a protracted and rancorous divorce. Fortunately for us, her story makes for a great time at the movies: There are twisty surprises, righteous anger, hopeful triumphs. Afrooz’s hubs – the host of a TV show called Good Old Days, which is telling, and perhaps should have been a red flag earlier – is a complete bore and a spiteful piece of garbage. And the ridiculous lopsidedness of Iranian civil law that allows for behavior like his is fucking outrageous. But Cold Sweat hints at something like hope within inert societal helplessness.

International Falls
{5/18 8:30p Ark Lodge; 6/6 9p Uptown; 6/7 12:30p Uptown}
Dark, quiet comedy that reminded me of Anne Tyler novels in which unfulfilled female characters take breaks from their lives, departures that seem both sudden and overdue. International Falls is set far from Baltimore, though, in the titular Minnesota border town, where a burned-out, passing-through road comedian (Rob Huebel) meets a dispirited local wife and mom (Rachael Harris). The hijinks that ensue are on the glum side, but they’re never uninteresting, and they get more “ha-ha” funny as the narrative gets more acerbic. This film almost seems custom-made for SIFF audiences.

Kifaru
{5/21 7p Egyptian; 5/22 4p Uptown; 6/3 4:30p Uptown}
The good people of Kenya’s Ol Pejeta Conservancy have dedicated their lives to preserving kifaru – the Swahili word for “rhinoceros” – and fighting the illegal wildlife-hunting trade. Ideally rhinos wouldn’t have humans in their lives at all, but their tusks continue to fetch huge prices (and, shockingly, are legally bought and sold in much of the world); protecting these magnificent creatures is not an easy undertaking. The star of this documentary – a beautifully photographed affair, with an effective macro-to-micro visual strategy – is Sudan, one of the world’s last living specimens of the northern white subspecies. His tale is intensely moving, a reminder that our big blue world is hanging on by the tiniest of threads.

Monos
{5/17 3:30p Uptown; 5/20 9:30p Egyptian}
On a remote mountaintop in an unnamed South American country, eight teenagers, loyal to a mysterious guerrilla organization, are charged with watching over a conscripted milk cow named Shakira, a white-lady hostage called Doctora, and their own tenebrous, tenuous connections to the outside world. Colombian-Ecuadorian writer/director Alejandro Landes has made an unsettling and masterful piece of cinema, rife with sly tension and probably one of the more visually arresting films you’ll see this year: The widescreen cinematography is startling in its exquisiteness. Parsing the meaning of a silent, tearful plea in the final shot is left to you, the viewer to whom it’s addressed. I’m still reeling.

Storm in My Heart
{5/19 1p Uptown; 5/28 9p Uptown}
Intriguing, thorough, experimental documentary that looks at the oddly parallel careers of two Hollywood legends – both born on the same day, in the same city – via their most famous 20th Century Fox musicals: Lena Horne in Stormy Weather (1943) and Susan Hayward in With A Song in My Heart (1953). Remember when I said ‘thorough’? Well: The films are presented side-by-side, in their entirety, with focus shifted via sound modulations and text factoids. By turns delightful, outrageous, enlightening, and heartbreaking, this is two hours very well spent.

Afterlife
{5/22 6:30p Ark Lodge; 5/25 11a Pacific Place; 5/27 9p Egyptian}
A Dutch teenager named Sam becomes the family caretaker following her mom’s untimely death. After Sam is killed in her own accident a year later, mother and daughter are reunited in the hereafter. A “welcome to the afterlife” party happens, some delicately-thrown shade signals something darker than the warmly-lit milieu, and Sam learns of a possible way to return to the land of the living. I loved the first half-hour of this film – its thoughtful New Europe casting, its Good Place-esque scenario as viewed through the lens of an international Google ad – and the rest isn’t bad at all. It just doesn’t reach the same heavenly highs.

Frances Ferguson
{5/20 6:30p Majestic Bay; 5/25 6:30p Uptown; 5/26 4:30p Pacific Place}
Dry (sometimes to the point of catatonia) comedy about a Nebraska substitute teacher (Kaley Wheless) whose overwhelming discontent drives her to an ill-advised transgression: as the SIFF description teases, “her life quickly takes a Letourneau for the worse.” Nick Offerman narrates the dry tale, drily. Austin filmmaker Bob Byington apparently has a niche following; while I’ve enjoyed aspects of some of his earlier efforts (Infinity Baby’s B&W lensing sort of made the deadpannery work for me) I don’t consider myself part of his fanbase. But I reckon there are worse things than a short-n-unsweet (just 75 minutes!) Ron Swanson-led tour of middle-American ennui.

The Nightingale
{5/18 9p Uptown; 5/23 9:30p Egyptian}
Bent on revenge for multiple acts of outrageously horrific violence committed against her family, a young Irish convict named Clare enlists the help of an Aboriginal guide named Billy to stalk a team of mid-19th century British officers through the rugged Tasmanian wilderness,. This journey is the bulk of The Nightingale, director Jennifer Kent’s followup to arthouse hit The Babadook – one of the best horror films so far this decade. There’s no doubt that Kent is tremendously talented, that I’ll seek out whatever work she produces as long as I live, or that we desperately need women’s viewpoints in stories that explore the formation of the “civilized” world. (And in ALL stories, D&D!) But there’s a relentlessness to the brutality in The Nightingale that makes it a difficult film to recommend. It’s a bit on the long side, too, sacrificing narrative momentum for diversions and feverish dream sequences one moment, appalling and deadening us to the officers’ increasingly sadistic crimes the next. Still, for better or worse, this film will haunt me for a long time to come.

Sword of Trust
{Opening Night Gala, 5/16 7p McCaw Hall}
In Lynn Shelton’s latest, two women (Jillian Bell and Michaela Watkins) attempt to unburden themselves of a Civil War sword handed down by an Alabama grandpappy. (Alabama grandpappies… ugggghhhh.) A prickly pawnshop owner (Marc Maron) and his mouthbreather assistant Nathaniel (Jon Bass) reluctantly enter with the couple into a world of conspiracy theory and scary-funny backwater buffoonery; developments unfold at a relaxed pace as the actors have a lot of fun with smart, largely improvised dialogue. Not my favorite Shelton – it’ll be tough to top Your Sister’s Sister – but worth a look during a theatrical run.

This is Not Berlin
{5/23 9:30p Pacific Place; 6/2 9p Uptown; 6/6 4p Egyptian}
Inventive Mexico City teen Carlos questions the mid-‘80s conformity of the city’s upscale suburbs. When he and his best friend Gera are invited to see Gera’s cool sister’s cool rock band at an infamous (but cool!) avant-garde club, they find an antidote to their disillusionment as they’re introduced to a less-inhibited world; the city’s sexually fluid, neon-lit, New Wave subculture – rife, of course, with its own problems – serves as a refuge from pervasive toxic machismo. There are some really good performances here, alongside cool (!) art and music, but like a lot of autobio coming-of-age films, it’s precious with its nostalgia and a bit too long for its own damn good.