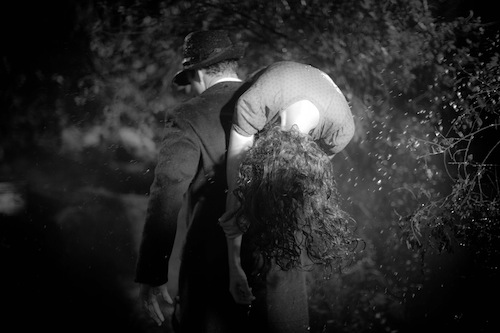 {Keyhole screens at SIFF May 30, 6:30pm and June 1, 4:30pm at SIFF Cinema Uptown. Cinematographer Benjamin Kasulke is scheduled to attend both screenings}

I’ve been a fan of Guy Maddin since I saw Isabella Rossenlini outfitted with beer-filled glass legs in The Saddest Music in the World. La Rosselini is back for Maddin’s new feature, Keyhole, a trippy black and white reimagining of The Odyssey as a surreal film noir, starring Jason Patric as gangster Ulysses Pick and Isabella as his pissed-off wife, Hyacinth. Narrated by an old naked dude chained to Hyacinth’s bed (oh yeah, he’s also her father. what the what?) and featuring a bicycle-powered electric chair—for that extra special Maddin touch.

I’m not a huge lover of experimental film, but for some reason, Maddin’s view always thrills me, and Keyhole is no exception. It’s weird and wonderful and full of beauty and WTF, (and Udo Kier! With a mustache!) and … well. I liked it. Maybe you will too?

Price Check is better than it should be, but still not quite as hilarious as I wanted it to be. Pete (Eric Mobius) is an ex-record industry hotshot turned frustrated corporate supermarket manager whose interest in his stalled career is revitalized by the arrival of ball-busting exec Susan (played PERFECTLY by Parker Posey). After doubling Pete’s salary and making him Vice President, Susan starts integrating herself into his life—until inevitably, all hell breaks loose.

It’s billed as a black comedy, but while Posey’s performance is darkly over-the-top, it’s ultimately more about sacrificing happiness for money—or vice versa—and Pete’s discovery of what’s really important in his life.