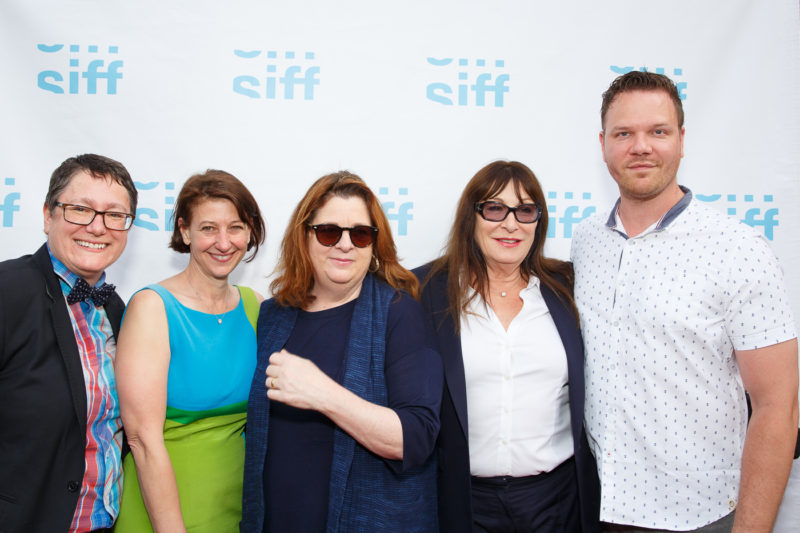 Omgggggggggggggggggggg you guys! I’m still smiling from last night’s red carpet amazingness, in which I was lucky enough to get to talk to Jim Parrack, Theresa Rebeck, and screen GODDESS Anjelica Huston for A Tribute to Anjelica Huston and the premiere of Rebeck’s second feature film, Trouble.

First up, Jim Parrack {who will always, always be Hoyt Fortenberry from True Blood to me!} who plays the hilariously clueless Curt in the film, and made me laugh harder than I’ve ever laughed watching someone kiss someone else on screen.

TIG: What drew you to the role of Curt in Trouble?

Jim Parrack: Well, I’m a fan of Theresa’s plays—so when we met, I got very excited about that. And I liked it because the character was written with a lot of behavior instead of a lot of explanation, so it gave me a lot of room to come up with why I was behaving that way. I think probably the dullest thing you can do in a movie is explain things, and there was none of that. There were a lot of things that got opened up organically—and you can feel where there was a playwright underneath the movie. And then of course the cast. It excited me that they wanted me around, so it was a no-brainer.

TIG: So was there a lot of improv in the movie? Or was it more scripted?

JP: I would say—I think all good movies are kind-of improvisational, but really she wrote the kind of things that would come out in the moment. So we pretty much stuck to the script.

TIG: What do you think your character’s favorite band, music, or song to listen to is?

JP: Oh, sh*t. I listened to a lot of Nirvana while we were filming! Maybe “Jesus Don’t Want Me for a Sunbeam” from the Unplugged album? Yeah.

TIG: That’s a good one! Anything else you want to tell me about the movie?

JP: Well just that people obviously know Theresa as a writer, but as a director she’s so intuitive. She left a lot open for us to play and discover. And that’s what all the good directors do. She wants to do more of this, and hopefully people will see she has a gift for it, and there will be more movies from her coming up.

I got to speak with director Theresa Rebeck next, who I was familiar with because I watched Smash religiously when it was on! If you haven’t read Rebeck’s essay {or excerpts from it} on what it’s like to be a woman working in Hollywood—and to get fired from your own show, you should do that RIGHT NOW. In addition to Trouble’s premiere at SIFF, she also has a play opening at ACT next week which looks AWESOME called Downstairs.

TIG: How did the idea for Trouble start forming?

Theresa Rebeck: I sat with Anjelica at the Golden Globes and we started talking about doing a movie together—and we also started talking about sibling relationships, so that was in there. I also have a farm in upstate Vermont, and we bought it from this guy named Sean Farmer and he was really … kind of a criminal, and kind of an amazing guy. So all the different pieces sort of started there and circled for a while.

TIG: Did you have Anjelica in mind for the role of Maggie right away?

TR: Absolutely! Of course, it was written for her. I just started thinking, I’m gonna write a role for Anjelica Huston. And then I thought—what would you like to see Anjelica Huston DO? And I thought, “I’d like to see her shoot somebody.” Because she is MIGHTY. And a beautiful talent. It was an honor to even be in discussion with her about anything—and then my favorite thing that she’s ever done is Lonesome Dove. So that was also in the mix.

TIG: Bringing it back to Smash—what drink do you think would be the best drink to throw into someone’s face?

TR: Probably a martini, because …. I don’t like ‘em. But they look great!

Lastly, I got to speak to the AMAZING Anjelica Huston! Huston was honored by the Seattle International Film Festival with their Outstanding Achievement in Acting Award, so in addition to asking her about her role as Maggie in Trouble, I asked her some v. important career-spanning questions.

TIG: What were some of your favorite scenes to shoot in Trouble?

Anjelica Huston: Well, I guess kissing David Morse didn’t hurt! Otherwise, just going full at it with Bill Pullman. Those scenes were so satisfying because you never get to be an idiot in the movies, and I was such an idiot in those scenes—and I enjoyed it full bore.

TIG: What do you think Maggie’s favorite band, song, or type of music to listen to is?

TIG: Did the bag of oranges scene in The Grifters give you nightmares for life?

AJ: It certainly was a perturbing scene. And to do it with the great Pat Hingle—YES. It was disturbing. In fact, I got horrible food poisoning right after that scene. Although I’m not sure if it was food poisoning, or just a reaction to doing the scene. I was not well after.

TIG: Morticia Adams and the Grand High Witch {from The Witches}: BFFs? Or Enemies?

AJ: Oh, definitely BFFs—except they’d undermine each other. So Frenemies, and I think Morticia is kind about everyone. But she’d have held her own. Morticia is a kind of good witch. I think good has to win over evil; I’m old-fashioned in that respect.

TIG: One last question: referencing Smash—what do you think is the best drink to throw in someone’s face?

AJ: Something that stings their eyes! Straight Tequila.

{All photos by Imaginary Rich!}