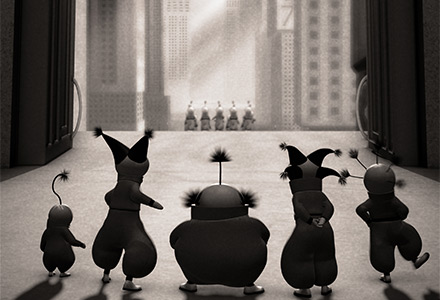 This program is a highlight of the festival every year: 12 diverse short films united only by their appropriateness for all ages. Most but not all are animated, but you certainly needn’t be a child or a parent of children to enjoy the suite.

My 4-year-old daughter, 7-year-old son, and I went to see it last weekend, and herein are the ones we found most memorable, although there were none this year we truly disliked

Perhaps you’ve wondered what would happen if several British soldiers with unshakeably rigid marching procedures were beset by a mischievous creature who resembles the furry hats they wear. Or what would happen if you stopped up a bagpipe with Jell-O. Wonder no more. The answer could never be anything else.

Visually the most impressive entry, owing an explicit debt to Fritz Lang’s monumental Art Deco stylings, The Numberlys posits the origins of the alphabet. Logically, it was a bit thin for me—why exactly are numbers oppressive?—but is was transfixing to watch. This was an unqualified winner for both kids.

A mini-documentary about 3 6-year-old girls learning to skateboard like small bee-fearing badasses without forgoing their fairy wings. Though I found the girls just a wee bit insufferable occasionally, the Girl Power message was awesome, and my daughter declared that I am to teach her to skateboard as soon as possible.

For the kids, this was hilarious because the creatures have suction-cup mouths and target-shaped butts, designed to be stuck together. I concur—it is hilarious. It’s also surprisingly poignant, inventive, and sweet. There’s an exceedingly good reason for this anatomical approach to travelling. I can confidently say I’ve never seen anything quite like it.

Olen loved this live-action revenge tale set in the mid-60s-ish, where the nerdy dinosaur lover has his day against his naysayers. Violet thought it was a bit scary, and I thought it was a slightly clumsy homage to Wes Anderson. Still, a satisfying end redeems much.

We all agreed that this was our least favorite for one reason: the man in it was just really unpleasant to look at. So much so that we all, independently, found it distracting. But the story was clever and cute, and it’s a mark of a good year when our biggest complaint was character design.