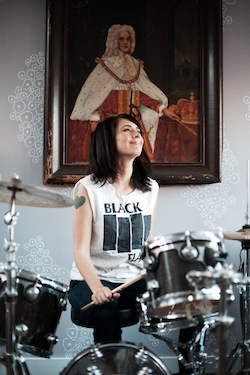 For those lucky enough to catch Who Put The Bomp?, the sizzling Le Tigre tour documentary shown at SIFF a couple years back, the new Kathleen Hanna biography The Punk Singer will be an answer to Pussy Riot-like prayers. (The two music movies would make a delicious double feature.) The fanzine artist, riot grrrl comrade-avatar, Bikini Kill co-founder, fourth-wave feminism fearless bellwether, Le Tigre musician and more just blazes away in this Kickstarter-funded fiesta of fiery rock and fiercely loving social commitment.

Directed by Sini Anderson, a sparkplug-member of the awesome radical-poetic Sister Spit collective and Chief Curator for the The National Queer Arts Festival, The Punk Singer puts you right in the middle of everything as it happens through the early days of punk girl revolution early 90s style. You're there in the pit at a house show, making the decision to commit to revolution with Bikini Kill. You're there in Kathleen's bedroom with she and her friends, using scissors and paste to manipulate clip art and appropriated text to juxtapose images of female passivity with phrases evoking the tortures of being watched and judged daily by patriarchy. You watch as she puts on provocative, prick-kicking fashion shows even though peers remind her that "we're only in high school, Kathleen!"

And then get blown away again as she takes to the mic like a natural, snarling and screaming and shouting passion for her ideal "rebel girl" and telling the boys to "move to the back (be cool for once)" and "girls to the front!" Her bandmates (Tobi Vail, Katji Wilcox, Billy Karren) have as much verve as X-Ray Spex or The Ramones, and though all the musicians are different from each other in many ways, as a mystical shred-unit of focused protest, the footage of them makes The Punk Singer an essential rock documentary.

Anderson is sharp enough with her own arts and letters background to know how writing and other forms of creativity inspire musicians, and Hanna and Bikini Kill were all about pulling in things that inspired them outside of music as well as the rock they loved. Fanzines are a big part of this saga: self-made small magazines meant to both remind the world of its hypocrisies and set up an uncensored self space to express raw identity (to talk about anything, without caring who it might offend).

Hanna's fitful childhood journey from her birth in Portland to Maryland to attending Evergreen State College just when post-punk was at its apex and a new generation was swelling against the conformist ranks is excellently documented. Hanna's becoming an adult woman created a scorched need to tell the world to pay attention and acknowledge her and other women coming from a childhood cut short by sexual inappropriateness and emotional coldness in her family. It also allows her to dial back to her childhood, reclaiming the simple joys of sharing play and being exactly who she wants to be in the middle of insensitive grown-ups always insisting on their own ways.

People laugh a little about her "Valley Girl" accent, but until someone with a certain amount of cred in the straight world bucks up, the rest of us weirdos tend to go a little unnoticed. And Bikini Kill was dead-set against the everyday cruelties women must endure to find acceptance. Hanna and her friends find all of this unacceptable and are more than happy to call out not only sexism, but racism, and any sort of bullying.

The narrative has intense moments of faithful artistic action, ruminated cultural controversy, and is a wonder of historical data. The media "blackout" that was self-imposed by Hanna and other riot grrrls in response to sexist portrayals in the press may seem to some like it was self-defeating, and maybe wouldn't work now that the power is in super-spin (not retreat). (But really? Is it really?) It's bracing and enjoyable to think that a generation of women said no to being pushed around and objectified by the commercial press, though it may have kept their records from getting further out there (debatable, considering how much acceptance real punk will ever get — but could Bikini Kill have become Green Day otherwise?). It was a decision they made themselves, and those sort of decisions are always right.

Hanna's own deeply felt personal highs and lows are explored, from finding her calling helping other women to embrace their struggle, and her romance and marriage to Adam "Ad-Rock" Horovitz of the Beastie Boys; from her sweet friendship with Kurt Cobain (who believed her and protected her when she was stalked by a menacing ex-boyfriend), to getting punched in the face for no reason by Courtney Love freaking out as usual. The final third of the film deals with Hanna's health struggles, which will be news to many fans who may have been out of the loop as to why she hasn't been a focal point in the underground music scene since Le Tigre broke up. She's back though — her masterpiece, the secret solo (back to the bedroom) 1999 album Julie Ruin is being revived in spirit and mission as new band The Julie Ruin, and there are still plenty of young women and men eager to play out with her and cover her songs.