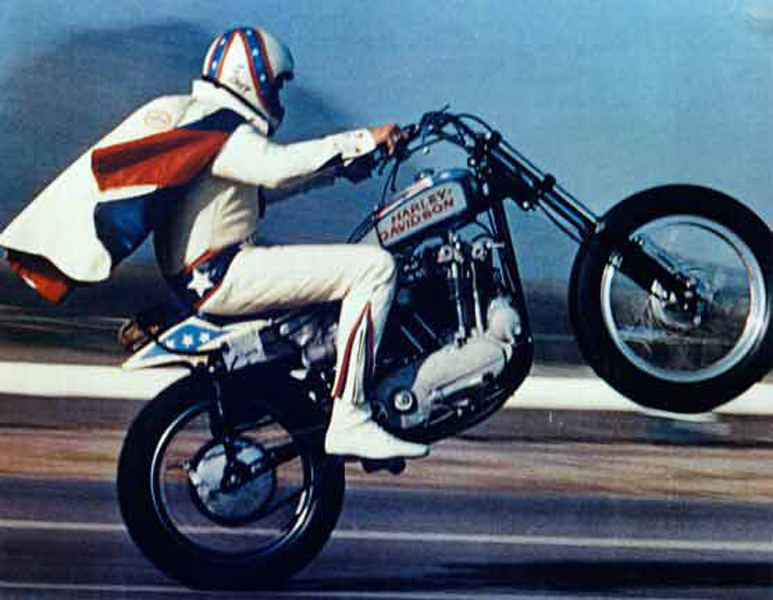 I wasn’t quite born yet when daredevil motorcyclist Evel Knievel did his most famous jumps, but I do remember watching them on reruns of Wide World of Sports and learning later that he inspired Fonzie’s “shark jump” on Happy Days (worst decision ever), so I went into this documentary with very little knowledge about the man inside the white leather jumpsuit.

Being Evel is the portrait of a man who built himself up into an American Hero by sheer ambition. One of my favorite moments in the film is how he convinced the owner of Caesar’s Palace to book his own jump over the fountain by impersonating several different people in the press and creating hype—a jump, by the way, that he didn’t make, and that you get to see replayed over and over in the (literally) bone-crushing TV footage.

After that, he kept concocting crazier and crazier stunts that earned him more and more money; money which he spent on cars, flashy jewelry, women, and some of the most fantastic 70s-era suits I’ve ever seen. As you can imagine, suddenly having millions of dollars and fame can warp a person’s perspective and by the time he made his Snake River Canyon rocket jump, he had morphed into kind of a monster.

I don’t want to spoil what, exactly, caused him to completely fall out of favor with the public—but man oh man. It’s quite a story.