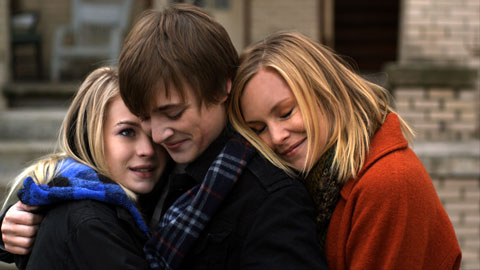 Cherry centers around Aaron, a seventeen year old freshman at some unnamed Ivy League university. He’s sensitive and smart but still in his awkward teenage years. Typical college behavior ensues as he discovers alcohol and women (including the gorgeous, but older, Linda; problems are complicated when her troubled teenage daughter Beth discovers Aaron). Soon, his overbearing (and stereotypical) mother is alarmed when his grades start to falter.

The college pranks and gags that occur are predictable and you’ll never convince me Aaron’s roommate is smart enough to get into an Ivy League college, but there is a sort of sweetness underneath of the college raunch comedy. While Cherry doesn’t entirely work as an outlandish college sex farce (Animal House made all subsequent films unnecessary) and the character trait added to the cute girl down the hall is, at best, off-putting, the movie overall has its heart in the right place. You do get the sense that Aaron and Linda do care about each other (although maybe not as romantically as he’d like) and it mostly seems believable. It’s not a perfect movie, but I am glad I saw it.

{Cherry plays at the Seattle International Film Festival on Saturday, June 5 at 11am at the Neptune Theater.}