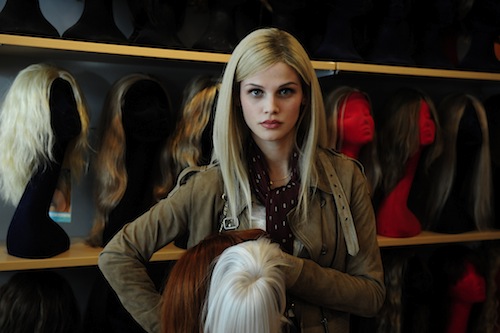 The Girl with Nine Wigs is a German drama about the real life of Sophie van der Stap, who found out she had a rare form of cancer when she was 21 years old, blogged through the entire process of treatment, and then wrote a book about it.

But it's not just about the daily chemo drips and stark white hospital rooms and radiation treatments — altho there is plenty of that (which is really, really hard to watch). It's about how she reclaimed her identity and continued to explore life by buying a bunch of awesome wigs and embracing them as different characters, which helped her get through even the roughest times.

Of course there are moments of levity, as there would HAVE to be. Because otherwise, ow my heart. Lead actress Lisa Tomaschesky does a fantastic job expressing every complex emotion Sophie goes through, and Director Mac Rothemund grounds the whole story in beautiful reality. It definitely feels like an actual true-life story, as opposed to an adaptation of that story.

It's really an important film to watch in terms of understanding what people who have cancer have to go through — how their life is both different and the same as everyone else's. I just have to warn you that even though the outcome isn't as tragic as it could have been (don't feel like I'm spoiling anything here, but I apologize if you think I am), it's still a tough film to get through. It's worth it though, for sure.

{The Girl with Nine Wigs is screening at the 39th Seattle International Film Festival on Wednesday, 6/5, 6:30pm at AMC Pacific Place, and again on Friday, 6/7, 3:30pm at SIFF Cinema Uptown. Actor Lisa Tomaschewsky and subject Sophie van der Stap are scheduled to attend both screenings}