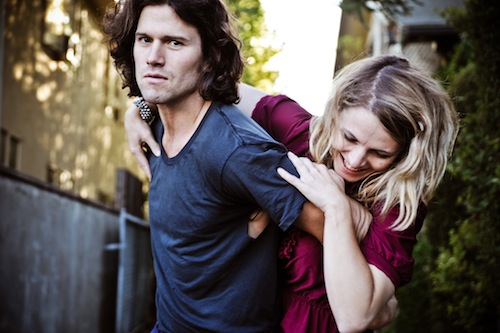 In 9 Full Moons, Frankie (Amy Seimetz, I sure do like seeing you in everything!) is so broken, that she drinks herself into oblivion hourly and even brushes off getting raped with a vague indifference and an admission that it was probably her fault for not fighting back. And Lev (Bret Roberts) is so broken that he barely registers any emotions and is so closed off that it would be impossible to ever know who he is. Hell, he probably doesn't even know.

Frankie wants to be a traveling gypsy. Lev wants to break into the music biz … and neither one of them know how to be happy. It's a match made in heaven, right? I'm being snarky, but it's kind of true. These broken people are so broken that only they could even begin to understand how broken the other one is. And you really, really want them to make it — but you know they're probably just going to end up even more broken in the end.

This film is gritty and dark and depressing as hell. But the screenplay is solid, the acting is fucking brilliant, and Donal Logue and Dale Dickey (again! man, I love that woman) are in it too. Definitely one you shouldn't pass up.

{9 Full Moons is premiering at the 39th Seattle International Film Festival on Thursday, 6/6, 7pm at SIFF Cinema Uptown. There will be a red carpet arrival with cast & crew, and a Q&A afterwards! It's also screening again on Saturday, 6/8, 1:45pm at The Harvard Exit. Director Tomer Almagor is scheduled to attend both screenings}