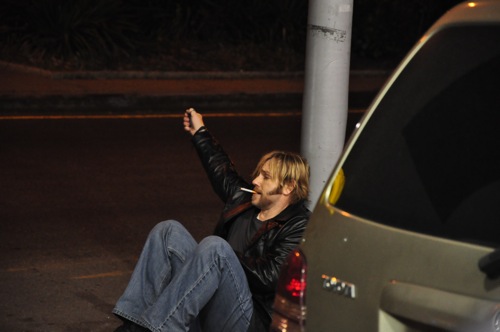 Holy trainwreck, Batman. Roadie introduces us to 40-something Jimmy Testagross (Ron Eldard, who acts his ass off here), who’s spent the last 26 years of his life being a hardcore roadie for 70s rock group Blue Oyster Cult. Yes, you read that right. TWENTY SIX years of being a roadie. He claims he’s doing “what he loves”, but once he’s fired and forced to return home to Queens, you get the sense that he’s fading every time he has to say that out loud. To complicate things, he discovers his high school nemisis is now married to the (still completely gorgeous, DUH) girl he left behind to embark on his wild rock-and-roll life…or something – plus, his mom is old, alone, and clearly not doing so well all by herself.

With every lie Jimmy tells to convince himself that he escaped a mundane life being “stuck” in his old neighborhood for glory and fame (dude, you’re a roadie), you can see him crumbling – and it’s not long before he completely disintegrates. This might seem like a typical “grow the fuck up” film, but what elevates it beyond the ordinary are the performances. Eldard does some of his best work here, with Lois Smith as his mom, Bobby Cannavale as his annoying taunter (we all know that guy – the one who made your life miserable in high school, and now acts like you were BEST FRIENDS), and Jill Hennessy as the smoldering ex doing a more than fine job of supporting him. Overall, this is just a great, well-written character piece. I dig. Maybe you will too?