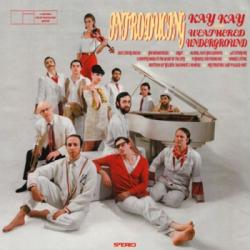 {On Sunday, June 12, 2011, Kay Kay and His Weathered Underground will be playing a record release show for this album with The Young Evils and The Can Can Castaways at the Triple Door. If all of this sounds extraordinary to you, we love you as much as we love those artists and that venue — and that is loads and loads.}

Kay Kay and His Weathered Underground sounds as if freak rock died and went to heaven in 1971, instead of the miasmatic personal singer-songwriter purgatory that actually mostly formed that year’s musical output. This is appropriate, as the band was spawned from the early demise of Gatsby’s American Dream, a much hyped Seattle-based band that many people planned on dancing to and singing along with for years. But like the 60s, the dream was over. It’s just that no one told Kirk Huffman and Kyle O’Quin that they could have an even better time with the funkier, psyche-stirring topical cabaret KK&HWU, especially when master musician and band-butterfly Phil Peterson was brought on board for their double-down debut.

The history of the band is occluded by V2 signing them and then dying on the vine; the Live At The Pretty Parlor DVD and sold out shows at the Triple Door have bolstered the legend but it never quite coheres in the minds of regional writers. But once they get the story scribes go suitably ape-shit over a local band as courageous and supremely constructed (up to eleven members at times) as any from Sufjan Stevens to I’m From Barcelona, but with their own mescaline-BBQ bite.

Introducing Kay Kay and His Weathered Underground has been swinging wild on the cyber-vines for awhile, but that doesn’t mean you shouldn’t hunker down and purchase a hard copy as they now hit the streets this summer. It’s probably going to look gorgeous in your collection (as this group is artistically ambitious in everything it does, from sprawling, senses-exploding live shows to massive movements in every arrangement, to sure-is-pretty packaging), perhaps even as gorgeous as it sounds: Bold, sweet-pop blizzards (“Diggin'”), bittersweet bonbons (“Paychecks and Pipe Dreams”), and buoyant dancehall anthems (“Sweet Strange Dreams”) alike.

That all this string-strung and head-choir hootenanny and hullabaloo can contain wonderfully stream of conscious happily low life narratives so effectively (“All My Friends Are Passed Out”) and with such sublimely subtle storytelling (“Oh Lord, I Hate You California”) makes Kay Kay not only the part band of Seattle, but fully capable of releasing an album you can swim around in alone or frantically obsess over in a crowd. I am a recent newcomer, having missed the previous releases, so this was all pure joy to me once it hit my ear-veins. Unlike their spent pals at the end of the party, at the end of this marathon full length, I won’t be coming down for awhile. And am looking forward to seeing/hearing them play every chance I get from now on.