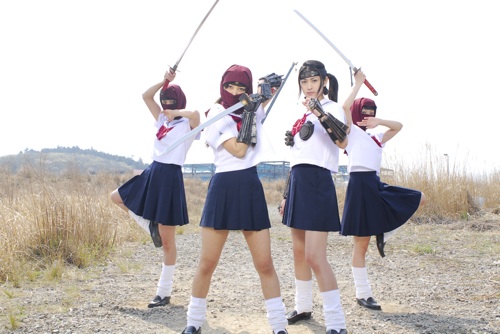 RoboGeisha delivers pretty much exactly what it promises…and maybe even a little bit more.

Yoshie and her sister Kiyohiko find themselves in a bit of hot water after falling prey to young Hikaru Kageno’s good-looking charms. Seems the Kageno family is kidnapping girls to build an army of Assassin-Geishas – which gives everyone an opportunity to see a bunch of hot chicks running, bouncing and fighting in sports bras, hot pants and the occasional schoolgirl outfit (and who DOESN’T want to see that?).

The two sisters end up trying to constantly one-up each other with new robot accoutrements in order to prove who is the best, but when it’s revealed that the Kageno family has a more nefarious plot in store, Yoshie must decide if her true self is more human than robot in order to save Japan from their schemes.

I found the whole thing ridiculously enjoyable, but just a note: a film that involves breast machine guns, armpit knives (and I quote: “When I strike a sexy pose, swords come out!”), demonic acid-like breast milk, and pornographic demon twins that shoot ninja throwing stars out of their butts would best be enjoyed after many a cocktail – especially when it reaches its even more over-the-top climax  (no pun intended!).

{RoboGeisha screens at the 36th Seattle International Film Festival, May 28 at the Egyptian, Midnight and again June 8 at the Neptune, 10pm}