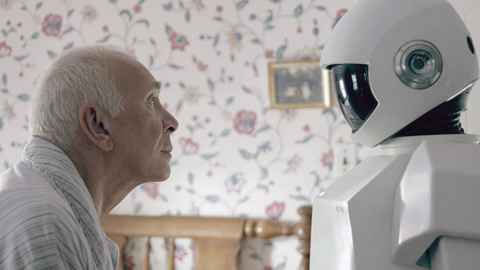 The near future, as imagined by Jake Schrier in his feature film debut Robot and Frank, forgoes silver jumpsuits and flying cars in favor of a refreshingly plausible iteration, where the principal difference between now and then are that the adults are named Madison and Hunter and Ava and Jake, and helper robots are around to cook and clean for, say, crotchety ex-cat-burglars like Frank Langella’s Frank, whose declining memory and the legacy of his lousy parenting skills make him an ideal candidate for robotic assistance. No one, even his own children, could reasonably be expected to put up with him for long, but the robot, who’s programmed to be somewhat charmingly emotionally manipulative, teases out the best in him.

The movie makes a few tonal missteps (rookie mistakes, most likely) and has an entirely unnecessary and implausible twist towards the end, but otherwise it’s completely enjoyable.