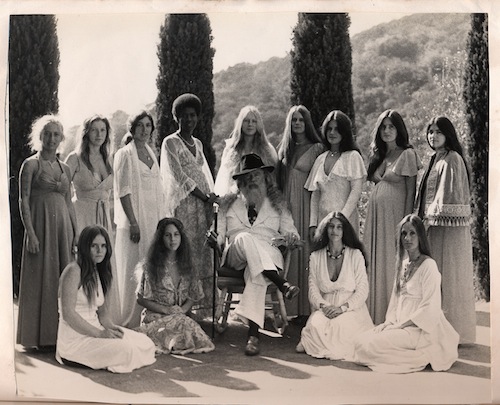 {The Source screens at SIFF June 8, 8:30pm and June 10, 11:30am at the Harvard Exit. Director Jodi Wille and subject Charlene Peters are scheduled to attend}

“That’s not pot. It’s the sacred herb.” I like to imagine Father Yod said this right before posing in his big pimpin’ suit with all his ladies for this photo.

Before I saw The Source, the only thing I knew about this trippy 70s cult was the name of its founder, Jim Baker (or Father of Light, or Father Yod, or YaHoWha), and that it derived from a popular organic, vegetarian restaurant on the Sunset Strip. Now I feel like I know WAY too much about The Source Family, but it’s all very interesting, so I don’t mind too much.

Baker made a boatload of money doing various and sundry things in the 50s and 60s, and then has this idea to create a hippy dippy restaurant in L.A. with his beautiful 19-year-old wife (he was something like 53 at the time) that made him boatloads MORE money. Then he took a bunch of drugs and did a bunch of kundalini yoga—and the restaurant evolved into a cult. At which point, Baker officially changed his name twice and went from “I’m here to deliver the word of God” to “I AM God” to “As God, I’m telling all y’all that I need 13+ wives. And we all need to have crazy sex orgies and blood rituals and smoke the sacred herb and have visions and deliver our message to the world.”

Also, everyone had to be renamed according to “The Age of Aquarius” manifesto (who knew it was more than just a song from the musical Hair?) that The Source Family lived by, so their names were “Electricity Aquarian”, “Sunflower Aquarian”, “Octavius Aquarian” … you get the point.

Yup. That is some serious hippy shit, right there. And luckily (??) for us, one of the Source Family members, Isis (presumably, also Aquarian) was designated to be the family history keeper, and apparently Ya Ho Wa still talks to her today from the spirit world to encourage her to carry on his mission. Thus, we have this film.

It really is a truly fascinating tale. And I will probably never stop searching trying to find out exactly what the “secret blood rituals” they refer to in the movie are, just as I will never truly get over seeing a live birth—or Father Yod’s crotch—all up close and personal on film. I CANNOT UNSEE THOSE THINGS, YOU GUYS.

Anyway. My point is, as hippy shit goes, this story has got to be seen to be believed. I’m especially intrigued by the family members who continue to live off the grid in Hawaii and insist they still talk to their “Father.”

Definitely a documentary that’s worth your time and money. I hope it gets a wider Seattle release so that those of you who can’t make SIFF’s closing weekend get a chance to watch.