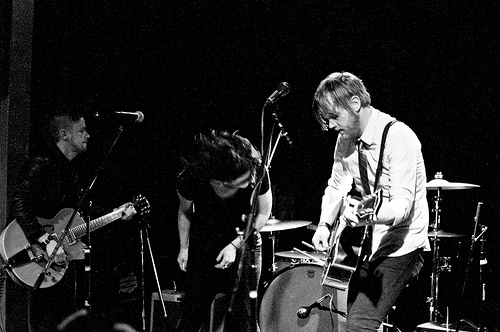 Don't miss: The Young Evils at the Crocodile {this Friday, 6/8}

Seriously, people. How can you not love the Young Evils? On top of playing great shows and just generally being awesome, they've been building up some great press lately — even moreso than usual — like the recent recommendation in Paste magazine as an upcoming Seattle band to watch, for example. The band is making good on that bet with the release of their newest track, "Darker Blue Bayou," which is off of their forthcoming EP Foreign Spells — and while we haven't gotten our hands on the whole EP yet, we're pretty damn sure that we're in for something good. Perhaps even a contender for our best-of lists for 2012.

Even way back in November, the new material was sounding brilliant — and to prove it, here's a snippet we typed up after the show they played that blew us away at the Rendezvous, (coincidentally enough, with a nod to the newly released track):

While we're still in hearts for everything we know and love off of Enchanted Chapel, we've got to say — this performance, and particularly the newer songs we heard in the set, made us giddy with joy to hear what's next so far as studio efforts go from the Young Evils camp. With a solid lineup finally in place, we're able to really hear the beginning stages of the evolution of this band, as they go from playing together to playing as a cohesive unit. Perhaps they've felt solid for a long time, as they well should — but whatever's going on with this next crop of songs we're hearing is really starting to translate off the stage and out into the crowd for a tangible, can't-deny kind of shift. We're particularly swooning over — if the set list was in order — a ditty called "Darker Blue Bayou," a track that was so good that the people behind us in the crowd were trying to discern what mega-band wrote it and how great the Young Evils were for choosing to cover it.

You don't have to take our word for it — you can catch that heady new-music buzz for yourself, and do some good while you're doin' it: The Young Evils will be playing at the Crocodile this Friday {tomorrow!} with The Redwood Plan, and Land of Pines {holy lineup, Batman!} as part of the 2012 series of Noise for the Needy shows. These fundraiser shows have been going on around town since June 1st, and on top of the Young Evils show, there's still plenty left to catch. The NFTN gigs are going on through this Sunday, and you can catch up on what's left of the calendar the official site here.

Get your tickets for Friday while there's still some left to get — PS, the show is all ages and it's only ten bucks! We'll see you there!