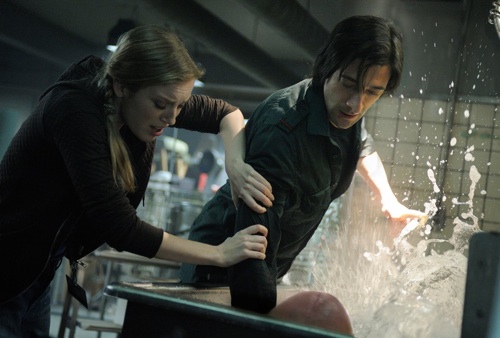 If you’ve seen the previews for Vincent Natali’s sci-fi/horror mash-up Splice, then you know exactly what to expect: a cheesy plot that winds up being ridiculously enjoyable.

Clive (Adrien Brody) and Elsa (Sarah Polley) – notice the Bride of Frankenstein reference there? –  are a romantically involved duo of hotshot scientists who’ve created a completely new species using a hybrid of animal DNA. In addition to being kind of cute, the lumpy, mucous-y beings (named Fred & Ginger) create an enzyme that can be used to cure disease in livestock. Following that thought process; Elsa proposes they start combining human DNA into their experiments, which could lead to the possibility of the cure for cancer and other human illnesses.

Not surprisingly, the giant corporation that pays the bills says “No way – too controversial!” but Elsa has other ideas. She and Clive go ahead and crack the code on the human DNA problem and secretly grow a new thing named Dren. I’ll go ahead and say right now that the creature is nothing short of amazing. The Special F/X guys kinda killed it on this one, guys. I couldn’t stop looking at her.

Anyway – from that moment on, the pair continues to make the worst choices possible (and then some) resulting in disaster you can see coming from 10,000 miles away.

Bottom line: Splice asks you to suspend your disbelief to the extreme, but if you can, it’s a whole lot of fun. It’s also a perfect Midnight movie choice, as I was definitely laughing and enjoying myself through the whole thing.

{Splice screens at SIFF, May 30 at the Egyptian, Midnight and again May 31 at the Neptune, 9pm}