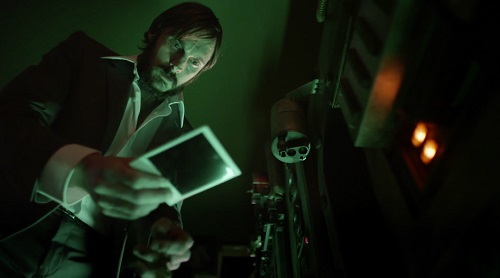 Time travel movies, particularly lower budget ones, are starting to be so prolific at festivals that it’s easy to get jaded, or to at least to have lowered expectations. I still try to check almost every one of them out, only drawing the line at the new Ethan Hawke film at SXSW this year. Understandable really, as it’s a pretty terrific genre to work within, and many of us are constantly looking for the next Primer (or perhaps Timecrimes). Time Lapse may fall just shy of those, but it’s a heck of a good time and smart enough  to satisfy the secret inner nerd in me. OK, giant obvious nerd – but who’s counting. Run, don’t walk to add Time Lapse to your SIFF to-do list this year.

The setup is straightforward as it is new (to me) – what if you had a camera that could take a picture of the future? More specifically, what would you do if you discovered giant, immobiile camera that took a picture of your front window once a day and the inventor of that machine was nowhere to be found. Now throw in three roommates with questionable life goals of their own (art, money, domestic bliss, and a bit of shopping) and you’ve got yourself a movie. A really darn entertaining one at that.

It’s probably not going to be a surprise to anyone that confronted with a magical machine that seems like it could make all your dreams come true things will inevitably go very, very bad. Especially if that “making all your dreams come true” part involves a bit of ethical flexibility. Confronted with the paradoxes inherent in time travel, the easy life, and a dash of jealousy things get complicated quickly for roomies Finn, Jasper, and Callie. But it’s the sort of complicated that’s fun to watch and twist your brain about – even if you may want to hit one of them over the head at times. Things degenerate for our heroes at a rapid rate in the well-calibrated film, ratcheting up the intensity over what feels like a brisk 104 minutes.

Bottom line: Time Lapse is one of my favorite SIFF experiences so far. The sort of thing I turned on too late in the evening and couldn’t stop watching until it was over. Which frankly is my amongst the highest praise I’ll give a film most days.