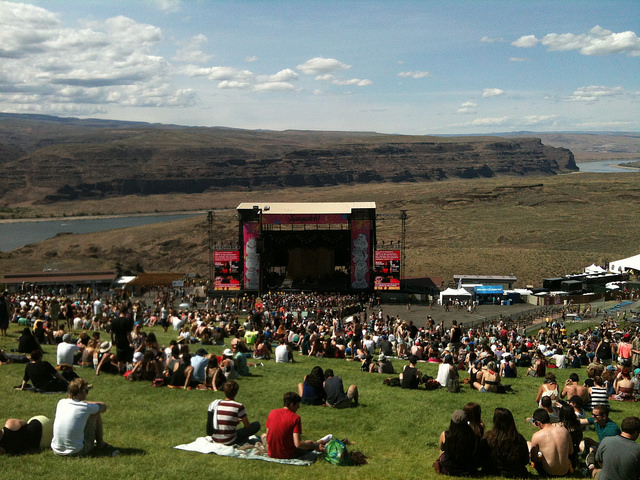 This year’s Sasquatch! Music Festival, taking place at the beautiful Gorge Amphitheater, was originally scheduled to be split between two separate weekends the second incarnation slated to take place over 4th of July). While that never ended up materializing, we were still left with a fantastic three days of music — the weather stayed nice for most of Memorial Day weekend, with only a little bit of wind and a light drizzle momentarily interrupting what was, overall, an excellent festival.

Here’s a few of the bands I managed to catch over the first day (Friday):

Modern Kin: The Portland outfit kicked off Sasquatch 2014 with a 1:00pm set at the Yeti stage, and did a good job of getting the crowd warmed up. All three members of the band contribute vocally, and the live show is a communal effort of sorts. Modern Kin is essentially Drew Grow and the Pastor’s Wives cut down to three members, picking up where the Pastor’s Wives left off, channeling their live energy into catchy tunes; at times loosely reminiscent of The New Pornographers. The rhythm section was pretty on point as well.

The Physics: Over on the larger Bigfoot stage, the Seattle hip-hop trio got the crowd grooving, bringing in a lot of passers-by just making their way into the venue. The best crowd reaction was for maybe their best summer-time jam “Coronas on Madrona”, from their fantastic 2011 album Love is a Business. The young crowd — still fresh and ready to start the weekend — was more than willing to dance along with them.

Kithkin: This local quartet wasted no time getting down to business on the small and entirely local Narwhal Stage. The band jumped, kicked, thrashed and shouted their way through songs off of their recent debut LP. Some bands confuse energy with quality, but luckily, Kithkin are blessed with both. Lead singer and bassist Kelton Sears spent most of the set yelling so hard you could see the muscles and veins in his neck, and also spent a good amount of the show in the crowd, holding his bass over the heads of their raucous crowd and attempting to crowd surf on top of them. It’s clear why they put mics in front of all four members of the band — someone on stage would probably feel left out if they didn’t get to scream along.

The Stepkids: The Stepkids kept things funky and playful with their late afternoon show over on the Bigfoot stage. All three members were dressed in matching slacks and white shoes, each with a different solid colored dress shirt. Guitarist Jeff Gitelman and bassist Dan Edinberg spent a large portion of the show doing mirroring choreographed steps and dance moves, and it was quite a lot of fun to watch. The music itself is a delicious fusion of smooth funk, R&B, and a little bit of blue-eyed soul, perfect to groove to on a nice sunny afternoon. Towards the end of their show they played an extended version of their most recognizable song “Sweet Salvation”, even throwing a series of solos for good measure. Everything about this band was clean and pristine; they looked sharp in their matching on-stage attire, and they sounded just as sharp while doing it.

De La Soul: One of my most anticipated acts to see this weekend was the legendary trio De La Soul. Just this past February, the band made all of their recorded work available to download for free from their website, giving the younger generation or just people looking to dig deeper into their catalogue good reason and opportunity to go back and study up on one of hip-hop’s seminal founding groups. They started out their set a little more contemporary sounding songs, then worked their way back to the Daisy Age material, with the crowd eagerly willing to dance along to “Me, Myself, and I”. Imploring the photographers and security personnel to “stop working and join the party” early on, they ended the set with their crowd-pleasing Gorillaz hit “Feel Good, Inc.” and Maseo even came out from behind his turntables to do an incredibly loud and pretty impressive version of his maniacal laugh at the beginning and end of the song.

Shakey Graves: Shakey Graves is the one-man project of Bodie Johnson, but you wouldn’t’t know it just by listening. Johnson played a blues guitar while simultaneously using kick pedals to play a drum with his right foot and a tambourine with his left foot. The result was a pretty full sound, and it seemed that a lot of Sasquatch attendants were already in-the-know, as Shakey Graves one of the larger audiences that the smaller Yeti stage would see all weekend.

Chance the Rapper: The Chicago rapper played to what he said was the biggest crowd he’d ever played to, and even though his career is just starting to take off,  it was easy to see why he drew such a massive and jubulant crowd at the Bigfoot stage. His sometimes nasally vocals sounded a little better than they do on his record, and performing with a live band (including drums, a trumpet, and keyboards) added some depth to the live performance that probably would have been lost had he just brought along a DJ. One of the interesting highlights of his set was a cover of the theme song from the PBS show Arthur. Slowed down and stripped down a bit, the song takes on a sort of endearing heartfelt quality that the originally version never seemed to intend. It was also a moment of pure optimism and hopefulness that seemed to contrast with pretty much everything else he sang about.

Foals: My first venture down to the main stage was for Foals. I’ve seen them twice before, at the Showbox and The Neptune, and each time they were a positively amazing live show. Today’s show was just as impressive as the other,s even with the limitations of the main stage. Lead singer and guitarist Yannis Philippakis has a tendency to jump in the crowd, often crowd surfing and walking around his audience while playing guitar during vocal breaks in their songs. Even though the crowd seemed farther from the stage than he’s used to, Yannis still made his way down to them, angrily playing guitar while they held him up. Foals opened their set with the strong instrumental “Prelude” which leads off their latest album, 2013’s Holy Fire. The only time they slowed down during the set was during the buildup to “Spanish Sahara.” I found out later on that during that build-up to “Spanish Sahara” a couple up the hill from the main stage got engaged while the song was playing, which is just awesome in my book. They closed the show on a high note with one of their heaviest songs, the Holy Fire single “Inhaler.”

Phantogram: Phantogram’s set coincided with the setting sun, and they took the opportunity to provide a nice backdrop to dance along to. Standing there watching them, I started to realize how many recognizable and borderline “hit” songs they have in their catalog. From the older songs like “Mouthful of Diamonds” and “When I’m Small” to the newer tracks like “Black Out Days” and “Fall in Love”, they really didn’t have any filler in their set, which is kind of impressive for a band with only two full length albums to their name.

Damien Jurado: Over on the small Yeti Stage, Damien Jurado played a nighttime set to a small but devoted intimate crowd. Surprisingly, he didn’t bring along any backing band; it was just him, sitting on a stool with a guitar, almost a coffeeshop musician setting. Luckily, his songs are so solid that they work whether he’s got other instruments involved or not, and the fans who made their way over to see him seemed to enjoy the intimacy of the performance.

Raz Simone: The Seattle hip-hop/R&B up-and-comer played a passionate and energetic set on the smallest stage at the festival, the local-only Narwhal stage. He brought on fellow Seattle-ite Sam Lechow for “Sometimes I Don’t”, and after the show he gave out free copies of his latest album, titled Cognitive Dissonance. He had a large crowd lined up for the album, so it seems a lot of people liked what they heard.

Outkast: Probably the most anticipated show of the entire weekend was Outkast’s Friday night headlining set. The crowd seemed cautiously optimistic after their recent Coachella show got mixed reviews — I’m happy to report that it seems they’ve ironed out any wrinkles, as this show was one of the highlights of the entire festival. They set things off with “Bombs Over Baghdad” and ran through their numerous career hightlights from their 20+ year career. Andre 3000 came dressed as only Andre 3000 does, in a white wig with a giant price tag dangling from his sweatshirt that read “For Sale” on one side and “Sold Out” on the other. The live backing band sounded tight the whole time, adding punch to the songs while Big Boi and Dre spit like they were still youngsters. They were joined on stage for a few songs, including “So Fresh, So Clean” by long time collaborator Sleepy Brown.

Die Antwoord: Closing the night out was South African rap-rave group Die Antwoord. Their EDM beats seem to attract a lot of the young partying dance crowd. Some seemed to be there just to see the spectacle. The duo started the show in glowing orange jump suits, which they eventually shed until they were both running around the stage in just their underwear. They were flanked on either side by backup dancers who were in full body suits with masks. (This performance also brought with it what seemed to be the largest amount of weed smoking from the entire day — for a minute there it seemed like smoke clouds popped up every five feet or so.) Die Antwoord kept things interesting, with Ninja often doing a lot of hip thrusts during songs, and Yolandi running all over the place, jumping on and around the large blocks set up all along the back of the stage.