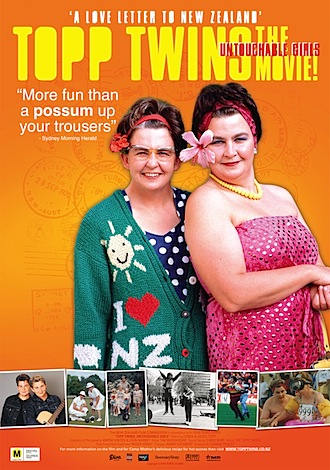 Billy Bragg calls The Topp Twins “an anarchist variety show” and it takes a few moments to register that he’s right.

Lynda and Jools Topp are lesbian, folk-singing activists who are also a bit of folk heroes in their native New Zealand. They also yodel. More importantly, they are the subjects of one of my favorite films to play at SIFF this year. The Topp Twins: Unforgettable Girls is a chronicle of their lives from their rural childhood to their political activism and stardom. What has remained consistent throughout their lives is that both are nearly inseparable and that they’ve always been able to see a glass half-full. The film is so devoid of any cynicism throughout that it’s either a large annoyance or complete pleasure to watch. I chose the latter. They’re also very, very funny.

In one scene documented in the film, the twins are set to get arrested for a particular cause and are told “don’t you dare get arrested, we need you two to sing tomorrow to raise money” for those getting arrested then.

{The Topp Twins: Untouchable Girls plays at the Egyptian Theater on Sunday, May 30 at 7pm and on Monday, May 31 at 11am.}