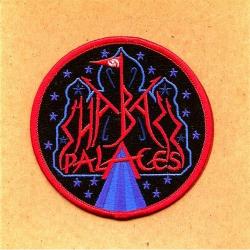 Long time vet Ishmael Butler (Digable Planets, Cherrywine), now laying low locally, starts the self-titled twin of his new joint’s dual releases with two of the most preposterously hooky and lyrically canny mini-operas you’ve heard in years, “Kill White T” and “4 Shadows.” These are two of my top ten songs of the year. From “eating cake with our rent” to knowing when to “break bread,” Shabazz Palaces is about compulsion-driven musical soul food, feasting on the familiar spirits of spoken word albums by Iceberg Slim and The Last Poets for true structure, using noir pacing more about sympathy for its beleaguered characters than malice to the suburban listener, and a trip back to 80s funky pop song-craft that was dissolved a bit in the generational thrush of gangster rage and recent mook-rap.

Listening to these two separated pieces of a long-player, it’s good to be back where the hip-hop seems as strong in narrative detail as it is in making your body move through the city. This is a rumination on the nature of consciousness in an undeclared war zone, where science fiction is your neighborhood, and your lunch money is paying to send rockets nowhere even near the moon. That said, Shabazz Palaces is a more advisable purchase than Of Light if you have to choose one due to the one-two throat punch of those tracks; but I love them equally, just personally prefer the former more than the one building utopia. Both are essential purchases for those who remember exactly when hip-hop took over rock’s legacy in universal pop art; and for those longing for a new chronicle based on the faithful elements of that genre.

This time around in Shabazz Palaces, “Butterfly” (Butler) wants to be known as Palaceer Lazaro, and like those punk rock band kids who never give their last names but storm barns, allows his stupefying Native Tongues tribe-inspired talents to be veiled from casual civilians. This would mean about as much as an MF Doom persona play if he hadn’t brought literary and convincing lyrical and musical skills to indie hip-hop, which sounds like it could have been made in any of its best eras. A slight mockery of Jay-Z’s style will be sewn into a story about someone needing to know where there flow is coming from, avoiding most of the cliches we’re all familiar with. It’s this brilliant dynamic of a resistance to archetypes yet a deep knowledge of historical styles (that admittedly Butler has loved through personally, retaining the remnants of what mattered and using them here). The song titles are insanely long, mostly, otherwise I’d drop more of them. The self-referential mythology resonates even when you don’t know exactly what you’re listening to, as ineffable relationships between rising technology and  withering humanity, overpowering law and ever-present chaos are mediated in “My Mac Yawns” and “A Mess.”

You like Blade Runner? Want to hear what an OST for Seattle would be like in that world Phil Dick and Ridley Scott created? Or are are you already hooked up with the dense cannabis-infused Brainfeeder joints from Los Angeles (Dr. Strangeloop, Ras G., etc.) and don’t need this comparison? These two generous minis are top of the line hip-hop mixed with the intentions of true science: Bringing together all the right things for something even better. Go out and get them today.