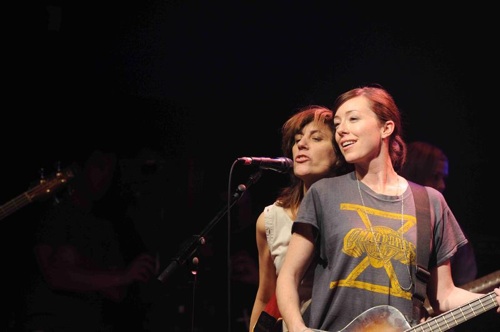 True confession: I will see absolutely anything with Molly Parker in it because I think she is one of the most amazing and underrated actresses on the entire planet – and she proves it once again in Bruce MacDonald’s Trigger.

This talky, play-like film follows one night in the lives of two women from a popular 90s band (reminiscent of Hole) as they reunite in Toronto for a Women in Rock conference. As rich, successful music producer Kat (Parker) and still-struggling-to-make-ends-meet Vic (the late Tracy Wright, in one of her last performances) reconnect, they hash out old grievances, relive past mistakes, and battle their personal addictions.

Even with a few fantastical moments like fire-breathing hallucinations and seeing a double of themselves in alleyways, the film feels authentically real – you totally buy that these women have a history together and they’ve both been through some heavy, heavy shit. I LOVED it, and recommend it highly to everyone. In addition to a great script and exceptional performances, the soundtracks rocks it out with music (and some stage time) by Canadian Indie bands Lioness, The Ghost is Dancing, Foxfire, and tons more.