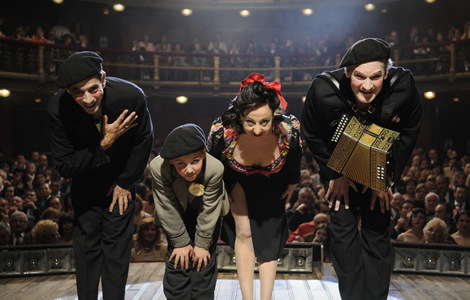 During my first few times through the SIFF program catalog I’d missed the fact that I’d actually seen this Paper Birds. It played in Palm Springs and I dearly wish at this point I’d captured my thoughts on the film at the time so as to better relate them now. I do remember I didn’t really love it and my core issue, though perhaps not the nuanced details, around the why.

The film is set in post-civil war Spain and follows a troupe of performers who are harassed to varying degrees by agents of the Franco government.  It’s a hard, hard life and these people try to make the best of it through their virtual family of performers. Dark as it is, that part of the film would have a lot to recommend it.  Including also the impressive visual look and art direction of the film. But something about the intense melodrama kept me from truly being pulled into the film’s world. Part of that, perhaps a large part of that is the overwhelming music that seemed ever-present informing me how to feel.  From the introduction in Palm Springs I recall mention that the music was composed by the director.  That’s certainly an impressive accomplishment, but I think in this case less would be more. The melodrama continues right through to the penultimate scene which I may have chortled a bit at (that is – I’m fairly sure – not the reaction being sought). Plenty of people I met really dug this film, and I want to be clear that I didn’t hate it either. So your mileage may vary.

Read more about Imaginary Rich’s SIFF-goings and recs over on his blog of cinematic goodness: A Random Walk Through Film.