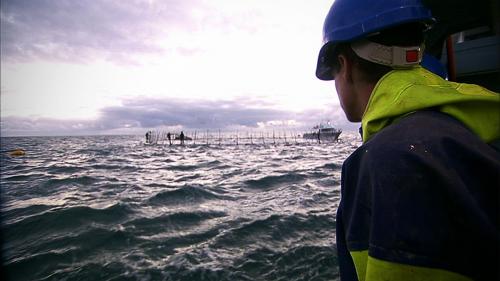 It’s been a great year for documentaries at the 2011 Seattle International Film Festival. I just saw probably one of my favorites of the year, Errol Morris’s Tabloid, which is a off the recent (brilliant) war train for the director, The Fog of War and Standard Operating Procedure, to focus on a narcissistic, psychopathic sex worker who enlisted a bunch of dupes to dominate a missionary in the 70s and then, well, I’ll let Embracey take it from there.

Sushi doesn’t give much history on it being a street food, and that is the only drawback to the documentary I can think of, besides statements that are repeated a few too many times trying to get its point across about sustainability near the end of the film. Otherwise, you can pretty much smell the ocean and the open-air markets where the fish is sold and sliced up, and hear about the crazy prices and competitiveness of the industry firsthand from exporting insiders and environmentalists alike. It’s the latter that take the doc in an unexpectedly subversive direction, showing how overfishing and not being mindful of ways of balancing sushi consumption will probably lead to disaster in the eco-system. It’s convincing, and probably a bit heavy-handed, but several scenes — such as one open-ended where a Seattle-raised San Fran sustainability activist-restaurant owner verbally spars with a sympathetic but less radical representative for the industry — crackle with a lived-in wisdom. The movie encourages dialogue as well as creates conviction.

That could be said the same as well for Revenge of the Electric Car, which is as lean and mean as one of the battery charged vehicles it obviously celebrates. The first movie on the subject by the same director ended on a dark note about the original electric cars being smooshed by GM, but the company comes back in swinging to try to correct the damage — along with several other entrepreneurs, each of whom have an amazing story and reasons for wanting to succeed in getting the world to stop being addicted to oil-run vehicles and start giving alternative means of transport a chance. This sequel repeats little of what came before, and though there are scenes of awesome struggle (the 2008 economic turn nearly crushed all hope out, big and little fighter for the car alike), this one ends on a very surprising, affirming note.

It’s great to see documentaries getting better and better, it seems, with less stock footage and more viewpoints that don’t always seem to support the specific voice of the filmmaker. For a while there docs with these topics tended to merely hammer home their singular themes again and again; just like with those who are going to grow up and actually engage a world they’re responsible for, instead of pretending they’re at the center of and have always been right all along, their aesthetics have been evolving too. Check these two films out to get informed, but also to be encouraged, enlightened, and energized by their craft.