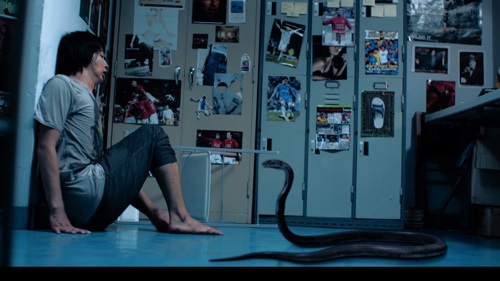 It’s no secret that I’m a fan of all things blood & gore – and that coupled with the promise of “thousands and thousands of snakes” meant that I had to see the Thai horror-thriller The Intruder (Kheaw Aa-Kaard). If you’re also a fan of cunning reptiles that not only spew venom, but appear to be fond of eating flesh, than I recommend you head over to The Neptune tonight at 9:30pm to see its final SIFF 2011 screening.

The plot is simple enough – a cast of characters get trapped in their low-rent apartment building when legions of King cobras descend upon the hallways, thirsty for blood. While the rest of the rag-tag band of survivors fight over one remaining vial of anti-venom, crazy-eyed Aunt Prai roams around performing rituals and trying to conceal a terrible secret. Just think of it as “Snakes in an Apartment Building” with a little more creativity, and you’ve got it. Naturally I had a whole lot of fun watching, but it might be a little too over-the-top for some (get ready to cover your eyes when one of the wanna-be rockers breaks out a giant pane of glass to “help” her boyfriend out. I’m just sayin’). Totally worth your time and money it if you’re into – and craving – some massive amounts of splatter!

{The Intruder screens at SIFF one more time, tonight, Wednesday 6/8, 9:30pm at The Neptune}