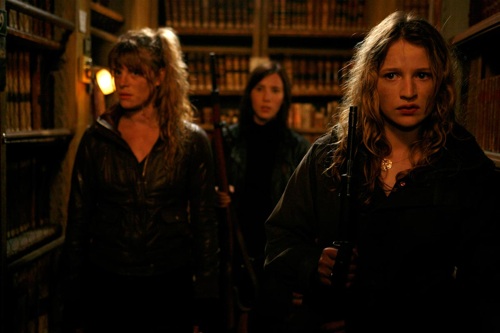 Ghost stories with legitimate scares are hard to come by – but this one definitely does it up right. The Village of Shadows starts out by telling a story within a story as two carloads of friends are headed towards a secluded town called Ruiflec for a nice, relaxing vacation– until they get there and discover it’s totally abandoned and CREEPY AS HELL.

The film jumps right into the action when one group discovers the other’s empty car in the middle of the road, doors open, and covered in mud. As if that weren’t disturbing enough, the vacation house is a depressing pit of despair and a haven for spirits that seem to possess the power to kill. Ohheygreat.

With overtones of both El Orphanato and The Devil’s Backbone, plus a ghosty kid that rivals both Sadako from Ringu and that creeptastic dead boy from Ju-on, this French/German horror flick has got it goin’ on. Nice atmosphere, and nice job with the twists – not to mention some seriously scary protagonists (the makeup and wigs from the flashbacks will haunt me FOREVER). Go see it!