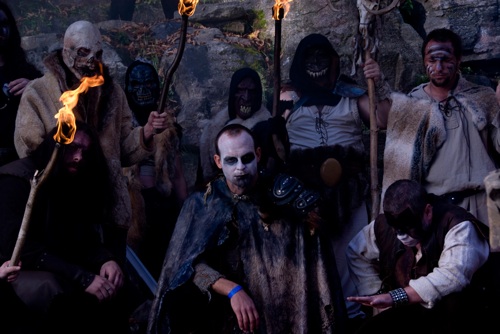 Since I was reminiscing a bit about the 1982 Tom Hanks masterpiece Mazes & Monters, I thought it might be a good idea to take a look a more modern take on LARP’ing by viewing The Wild Hunt.

LARP’ing, for those that aren’t total nerds (like myself), stands for Live Action Role Playing. Imagine you played a game like World or Warcraft. Now imagine you dressed up like the character you played in WoW and then went to some remote location wherein EVERYONE did the same thing and y’all talked like your character and acted like your character and then played the game with each other in real time….with lots of booze and (mostly) fake weapons. Basically like a more extreme Ren Fair…with elves and fairies and stuff.

Anyway, this movie endeavors to fully immerse you in the experience via Erik, his girlfriend Evelyn, and his berserker Viking brother Bjorn (I’m not being facetious btw, his brother’s character is actually a berserker Viking). Erik’s not in to playing, but Evelyn is apparently bored enough to ditch him for a weekend and shack up with some dude known as “The Shaman Murtagh”. But you know, Evelyn’s hot, and I guess Erik loves her or something, because he drags himself up to the LARP location in order to win her back.

Once Erik arrives, Murtagh’s clan starts acting creepier and creepier, until the thin line between reality and the game gets blurred to the point where no one can tell what’s real anymore. I’ll admit this film moves a little slowly, but the ending is totally worth the wait. Make sure you stay through the credits too!

{The Wild Hunt screens at SIFF June 5 at the Egyptian, Midnight and again June 7 at The Neptune, 09:30pm}