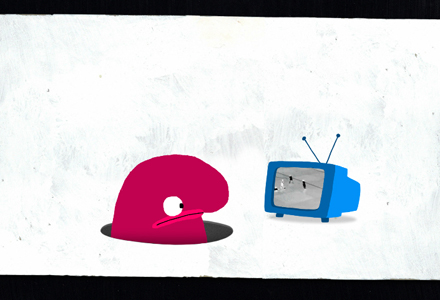 I always worry that it may be a bit impolite to recap the Shorts Fest films, since it’s not always easy to catch them outside of that one showing, but I so sincerely hope that you run across a chance to see them some time (for example, if any of them get nominated for Academy Awards and make the rounds before the ceremony) that I'll offer a rundown anyway. They showed 14 at this year's Family Picture Show on Saturday. And I’ve included links to trailers or to the full thing whenever I could dig them up.

Hop Frog
My very favorite of the shorts this year was this little gem that shows how little it takes to generate a compelling narrative. Brightly-colored creatures hop in and out of holes in the ground (rather like the Nowhere Man from Yellow Submarine), establishing crystal-clear personalities with just one or two hops. One mutating magenta fellow hops blissfully alone until a green Philly-Phanatic-lookalike joins him in the hole adjacent. “Is there room in this world for both of them?” quickly gives way to “can they live without each other?” If I can ever manage to find a link to it anywhere I’ll be sure to post it for y’all later.

Hedgehogs in the City
A poignant social commentary smuggled in by adorable woodland creatures who hatch a genius plan to recapture their homeland after it’s paved over. Everybody wins!

Hannah and the Moon
This sweet fable about a girl seeking solace from the moon when she can’t seem to get it from her busy mom tells its own tale with written words woven into each scene. It has a dreamy, Etsy-drawing quality that suits the mood beautifully. Trailer here!

Macropolis
Possibly the most conventional short in the bunch, Macropolis follows a defective pair of toys looking for a home. Their rescuer knows that even the imperfect will be perfect for someone. The animation style makes excellent use of stop-motion animation—the toys move in real time, while the real world whizzes past. It’s a neat way to solve the question of how they can move about without detection. Trailer here!

Uski Baarish (Her Rain)
I didn’t totally get what was going on for a lot of it, but it made me cry nonetheless. I think all you need to know is that the elder brother really loves his little sister.

While You Weren’t Looking
A huge crowd-pleaser, While You Weren’t Looking is a movie of triumph, wherein a smart young girl with hidden reserves of moxie manages to break free of her helicopter mom’s well-meaning smothering. The director, after the film, had to assure the children in the audience that you can’t really ride shopping carts like that—only with movie magic. Trailer here!

The Blue Umbrella
You’ll all see this one at some point—it’ll be the short playing before Monster’s University. The story is a fairly standard anthropomorphic love story, this time with umbrellas, but it is mind-boggling what Pixar can do in photorealism nowadays. Trailer here!

Snap
I don’t know about you, but I can’t get enough of training montages in underdog films. And I think I can safely say this is the first one I’ve seen where the training in question is designed to beef up the tongue of a fish-like creature with hunting problems. Well played, Snap.

The Window
A little boy dreams of being as brave as the knights in his storybook, and his courage is awakened when his damsel-in-distress also sets about trying to rescue herself. Very sweet.

Ones the kids liked more than I

The Mole at Sea
My children both voted this one of their favorites, which surprised me because I found it quite poignantly bleak. I think that proves that kids don’t notice bleakness if there are naked tushes involved. It follows Mole on a journey from his home on a litter-ridden roadside to a beach, which, it turns out, is packed wall-to-wall with people, going about their sunbathing in various states of self-absorption.

Sweetly Broken
This was the other one that pleased the kids more than it did me. To be honest, I found it sorta creepy. But the kids thought the marionette love story was great, so I’ll defer to them.

Subway Train
Have you heard of the Pop Ups? I haven’t, but judging from this music video, I’m guessing they do quite well indeed with the toddler set. Nothing whatsoever wrong with it, but ultimately not terribly memorable. See the whole thing here.

The Collector's Gift
For me, this was a clunker—either far too short or far too long. The premise—a man sets out to collect every element on the periodic table (I think?)—is promising, but ultimately doesn’t pay off. Trailer here.