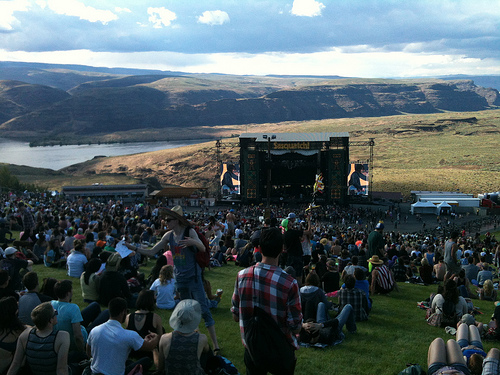 Sasquatch 2013 got off to a good start with young Seattle rapper Shelton Harris. Harris was a late addition to the lineup, and he took full advantage of his opportunity. Rhyming over indie music samples from the likes of Matt & Kim and Youth Lagoon, Harris’ rhymes recalled the upbeat ‘believe in yourself, you can do anything’ type of rap that Macklemore can be known for — fitting since Harris is actually an actor featured in Macklemore’s “Same Love” video. His young crowd multiplied as the set went on, surely bringing him plenty of new fans this weekend.

After Harris' set, Seattle guitar slayer Reignwolf kept things captivating down on the main stage with some interesting mid-day theatrics. Towards the end of his set, he walked down into the crowd, still playing his guitar. While down among the crowd, the Easy Street Records van pulled into the crowd next to him. He then climbed on the roof of the van, which had a mic and a kick drum waiting for him, and proceeded to rock in the middle of the crowd, as his new mobile stage drove him off at the end of his set. Killer! Then, Father John Misty (Josh Tillman) entertained as much with his humorous stage banter as he did with his musical endeavors. A fan yelling to Tillman “I love your beard!” led to several minutes of dialogue about how you don’t want to fall in love with his beard; long story short: it will cheat on you. His persona on stage brings to mind a Jim Morrison impersonator at a karaoke bar as he’s about to get cut off. His performance was absolutely a highlight of the day.

Vampire Weekend followed Father John Misty with a tight set featuring several songs from their new album “Modern Vampires of the City” as well as all the old favorites. As one might predict, the crowd went especially crazy for “A Punk”. Vampire Weekend were flanked on stage by four ancient looking columns and a large round mirror hanging in the center, which occasionally showed random holographic images inside. Seattle’s own Macklemore & Ryan Lewis closed out the night in grand fashion. Rocking an old-school Sonics jersey, Macklemore really showed why he was closing out the main stage and has had songs reach platinum status in the past year. Friday’s main stage featured a new stage portion extending out in front, allowing performers to walk out and perform amongst the crowd. As expected, Macklemore took full advantage of this new feature. A highlight of the set was his marriage equality song “Same Love”, in which he stepped back and away from the spotlight as vocalist Mary Lambert sang her captivating chorus on the catwalk portion of the main stage.

Saturday started out strong with Seattle band Rose Windows, their psych rock feeling perfect for the crowd still easing into their day. They jammed out their final song as the small crowd that had assembled in front of their stage drank it all in.  Seattle rapper Tilson XOXO kept things upbeat for his set, which was complimented by two drummers, a bongo player, a guitarist and a keyboard player. He even had his band outfitted in matching yellow pants with screen-printed leather jackets. He finished his set strong with his more dance-y numbers, and the crowd responded by dancing happily along. Michael Kiwanuka kept things light and breezy with a perfect sunshine-summertime vibe. His set started off with some small complications when his backing band’s bass had trouble working, but he quickly turned it into an opportunity and played an acoustic song instead. He finished his set by bringing tour mates Mumford & Sons on stage, complete with multiple horns and a violin player. They played a cover of The Band’s “The Weight” and had most of the crowd singing right along with them.

During Bloc Party’s main stage afternoon set, front man Kele remarked that their set at Sasquatch several years ago was one of the worst the band has played, and he was anxious to make up for that performance. Thanks to theenergy and liveliness of their songs, they had no trouble keeping the crowd excited. At one point they started covering Rihanna’s “We Found Love” before transitioning it into their own material. They finished their set with their strongest material, “Helicopter” and “This Modern Love” off of their 2005 album, Silent Alarm.

At 10:00 a crowd began to gather at the Bigfoot stage set to see Tame Impala, only to quickly find out that their set time had been changed and they had been moved to a smaller stage. This led to a large crowd swell as the smaller Yeti stage for Surfer Blood’s set as Tame Impala fans poured in to get close to the stage. Surfer Blood had an unusually large number of crowd surfers, at one point even lead singer John Pitts getting in on the action. They played songs from their soon to be released album Pythons, but the fans favorites came from their debut album, 2010’s Astro Coast. Surfer Blood’s set ended about ten minutes before 10:00. By this point, word of mouth had gotten out and most people were crowding in for Tame Impala’s set. What was supposed to be a seamless transition between Tame Impala’s 10:00 set and Sigur Ros’ main stage 11:00 set got complicated as Tame Impala’s gear was late to arrive at the venue. Fans were surprisingly patient, and they were rewarded when Tame Impala finally went on stage at 11:45. They rewarded the exuberant crowd with a truly amazing show; each song was stretched out and allowed to breathe, and they found ways to psychedelically jam out their songs without losing any of their songs’ intensity — a perfect end to the first full day of performances at the Gorge.