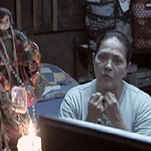 Highlight films from Germany, Greece, Iran, France, Japan, Austria, and the Philippines put the "I" in SIFF's final week/ends (6/8-17).

The Guardian's Son (6/9 6:15p Pacific Place, 6/12 9:30p Lincoln Square)
An inauspicious sequence of events leads a tabloid TV prankster (chubby-faced hottie Nikolas Aggelis) to his mother's birth village in rural Greece — and, yeah, it's one of those "forced to confront his past" yarns. But it's a lot of fun, with surprising impressionist strokes and an odd little narrative that loops around at its own droll pace.

It's Winter (6/15 7p Pacific Place, 6/17 4:15p Lincoln Square)
Raw Iranian drama with a Scandinavian sensibility: snowy, distant, and at times unbearably bleak, with an own-worst-enemy male hero. The story involves several poverty-stricken dwellers of a dreary Tehran suburb, and focuses on a fuckup mechanic who just can't catch a break… and that's often his own damn fault. This probably sounds more depressing than It's Winter actually is, because the film's visual splendor and emotional heft provide more than glimmers of hope.

Molière (6/17 6:30p Cinerama)
Lavish, very fun costume drama about what might have transpired during an early blank period (c. 1644) in the titular satirist's known whereabouts. Director Laurent Tirard (see 2005's criminally underrated The Story of My Life) imagines, beautifully, that an impoverished young Molière found himself in the (very Molièresque) throes of romance and subterfuge after agreeing to provide acting lessons to a rich, clueless Monsieur who bailed him outta the clink. Sexy Gallic hijinks ensue. Funny, accessible, and foreign: think Shakespeare in France. Good choice for closing night.

Mushishi (6/8 9:30p Lincoln Square, 6/10 6:45p Egyptian)
It takes anime auteur Katsuhiro Ôtomo (Akira) a while to tell an enchanting live-action fantasy story here, but patience is rewarded. A Mushishi is a wandering shaman who rids humans of malevolent spirits; Ginko (well-played by Jô Odagiri, who is hot even when wearing an Andy Warhol wig) is a very good one… even though he has no memory of critical pieces of his troubled past. The story's mythology gets muddled at times, but the film's emotional drive and glorious visuals keep it afloat through the lovely, lonely conclusion.

Out of Time (6/11 9:30p Pacific Place, 6/13 2p Pacific Place)
The pull of consumerism meets the grip of legacy in this sweet, melancholy Austrian documentary about four old-world businesses struggling to survive gentrification. The film finds its heart and soul, of course, in the people behind the counters as they go about their daily lives and recall the good (and bad) old days. And though only one of the shops is still in business by the end, the proprietors' stories and hurdles reveal unimaginably rich lives that hold wisdom and insight for us all.

Yella (6/13 7:15p Pacific Place, 6/16 1:45p Pacific Place)
The titular heroine (unbelievable Nina Hoss) is trying to make a fresh start — new job, new town, new life. Problem is, voices and images from her past keep entering her consciousness. Is she psychic? Is she off her meds? Does she see dead people? Director Christian Petzold tells her tale via a languid, occasionally jolting series of events, and doesn't let you in on the deal until the stunner of a final scene: it's nothing new, but it's told in a very new way, and whether you choose to buy it will affect your view of everything that came before. (I bought it, and I'm dying to buy it again.)

Delirious
The title doesn't make much sense, and neither does the song "Bohemian Like You" playing over the opening scenes, but this uneven New York story of a homeless youth (Michael Pitt, hot), a teeny-pop music diva (Alison Lohman, good) and a shady paparazzo (Steve Buscemi, doing his usual thing) ends up being a fun and occasionally insightful look at the absurdity of (and obsession with) celebrity culture. The film is at its best after Pitt's character gets flash-in-the-pan famous and Gina Gershon starts spinning bitter comedic gold as his manager-with-benefits. Surprise celeb cameos are fun, too.

Frozen City
If you haven't had your fill of raw, painfully realistic Scandinavian films, this Finnish offering is a good bet. In it, a problem-addled taxi driver (excellent Janne Virtanen) flees the mean streets of Helsinki for an apartment in the suburbs. And then more problems present themselves. And that's just the beginning of a big-time downward spiral. Whew. Heavy, but good.

Goya's Ghosts
When not taken seriously, Milos Forman's latest, an oddly cast film about Francisco Goya (Stellan Skarsgård) and the Spanish Inquisition, is a hilarious, trashy hoot. Javier Bardem (as a villainous clergyman turned resistance leader) and Natalie Portman (first as a young woman who goes crazy in jail, and later as her horse-teethed prostitute bastard daughter) get the lurid, campy tone right. Or wrong, depending on your perspective.

Little Book of Revenge
A French-Quebec jewelry-store accountant is prone to making poor life choices, including the one to plot revenge against his asshole coot of a boss. What result are a dumb downward spiral, a series of pains in the ass, and a consistently annoying film that manages to seem half-assed and overdone all at once.

Offscreen
This big disappointment from Danish director Christopher Boe (Reconstruction, Allegro) finds actor Nicolas Bro (playing a crazed version of himself) making a video diary of his faltering relationship, and eventually becoming a murderous psychopath. I'll spare you the details. Just know that this film is ugly, preposterous, and just plain gross. Check the photo to the right: do you want to look at *that* for 96 minutes?