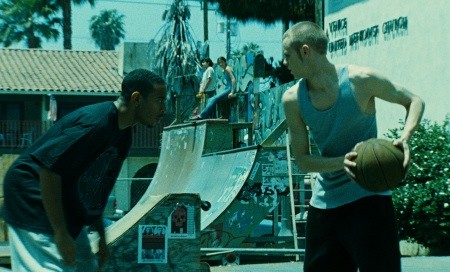 Ball Don’t Lie has the misfortune of playing at SIFF only a few days after the festival paid tribute to Spike Lee. The reason this is important is that Lee made the basketball film that Ball Don’t Lie wishes it was: He Got Game.

The central character here is Sticky, a nice kid with Obsessive Compulsive Disorder that had the misfortune of being bounced from one foster home to another. He seems like a nice kid dealt a shitty hand to play. His one salvation is that he is really good at basketball; a white kid who can jump. Street basketball star Grayson “The Professor” Boucher plays Sticky but you don’t see much more than him being quiet and nonresponsive.

There could be a good movie in Ball Don’t Lie because of the great hip hop soundtrack and some exciting basketball scenes but it uses every cliché you can think of. In fact, there is a good movie in there, but Spike Lee already made it.

{Ball Don't Lie screens Monday, June 1 at the Kirkland Performance Center at 9:30 pm and will be released theatrically on Friday, June 5 in limited release. He Got Game can be found in any video store.}