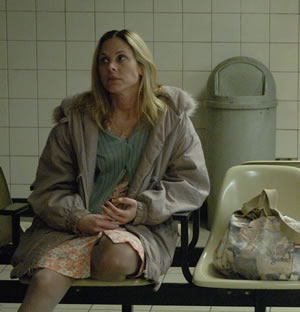 In Downloading Nancy, Maria Bello is a housewife whose life has long been a series of either neglect or sexual abuse. She finds pleasure in the darkest places on the internet and through cutting herself. She lies to her husband and therapist to say that everything is alright, but they don’t notice the razor blade marks across her body.

Enter Louis, played by Jason Patric, whose arms Nancy runs into because they both have troubled histories and are interested in the roughest of rough sex. Nancy wants Louis to kill her, and he’s the first person to take her request serious, she said, out of thousands. These days it could probably take half an hour on Craig’s List to find someone who wants to oblige.

Downloading Nancy is well-acted, especially with Bello’s Nancy, who wonders aloud if anyone will care if someone emotionally dead really is physically, but the film is so over-the-top that you wonder who could enjoy sitting through this film. This film marks the most uncomfortable 100 minutes of SIFF yet.

{Downloading Nancy screens one more time, at the Harvard Exit today, Sunday, May 31 at 4pm}