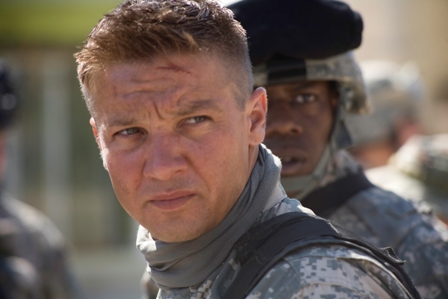 I was originally apprehensive about The Hurt Locker as I tend to avoid all things involving war (in order to also avoid emotional overload), but I am a Kathryn Bigelow fan, and boy howdy does that lady know how to make a film.

The plot is thus: Bravo Company heads out each day in war-torn Baghdad to search for and disarm bombs. After a casualty, hot-head maverick Staff Sergeant William James (Jeremy Renner) steps in and immediately creates conflict with Sergeant JT Sanborn (Anthony Mackie) with his reckless maneuvers. There’s no specific mission here – the story is simply about these men trying to do their job without getting killed (or killing anyone else in the process).

Portraying the effects of war both psychologically and physically, The Hurt Locker features amazingly beautiful direction and superb performances – as well as telling a fantastic story. In short: this may be Bigelow’s best work. I definitely recommend you see it as soon as it’s released

{Although the screening dates for The Hurt Locker at SIFF have passed, the film’s site states: “in select theaters June 26” – let’s hope Seattle is one of the limited release cities!}