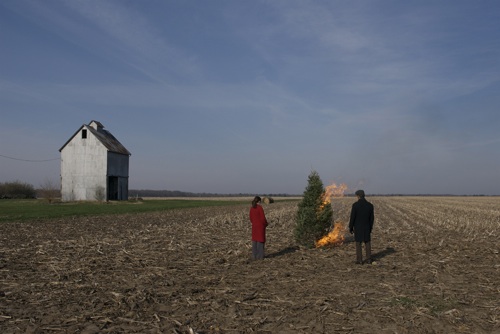 The Merry Gentleman starts out with troubled assassin Frank Logan (Michael Keaton) finding himself unexpectedly saved one night when he spies battered-wife-in-hiding Kate Frazier (Kelly MacDonald). The two quickly form a close relationship, even without knowing each other’s secrets. There’s an undertone of mystery here, but the core of this film is the importance of friendship – how it can make you stronger, help you see yourself in a different light and even shape who you are.

Keaton’s directorial debut (he stepped in for Ron Lazzeretti, who suffered a ruptured appendix just a few days before filming started) sets the movie’s somber tone, but in front of the camera he’s so understated that at times I forgot he was even on screen. The real star of this picture is MacDonald, whose range draws you in and makes you care about what’s happening. If she hadn’t played Kate, I’m not sure the movie would be as strong.

Still, I liked it overall, so it earned a solid 3 (out of 5) stars – definitely worth a watch.

{The Merry Gentleman plays one more time at SIFF on Saturday, May 30 at the Harvard Exit, 3:45pm}