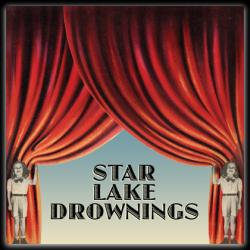 Seattle quintet, Star Lake Drownings, has the perfect sound for your summer soundtrack. Their self-titled debut has just been independently released and it is a catchy little collection of woozy dream-pop. Their shimmery, atmospheric sound lies somewhere in between My Bloody Valentine and Belly.

The album is brimming full of sultry melodies that float listlessly along to the soft, breathy vocals of singer Amy Allsopp. Songs like "In a Blanket Castle" contain the waterfall guitar sound of early nineties British rock and a vocal delivery that is indecipherably sweet. Behind the reverb and the hushed lyrics is an impressive set of well-written songs.

You can pick up the physical CD at one of their shows and it is also available to download via itunes. With summer upon us, this is one to add to your current listening.