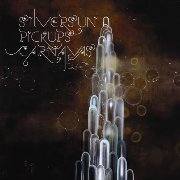 Sometimes familiarity is a good thing. It can make you feel more comfortable when presented with a new and exotic situation, allowing you to be yourself. However, most people recognize the saying "familiarity breeds contempt," and that may be the Achilles' Heel of the Silversun Pickups' debut Carnavas. It sounds so much like so many other bands from the mid-1990's, ranging from Smashing Pumpkins, Catherine Wheel, Lush and other fuzzed-out alternative rock bands from the hey-day of the guitar that you almost feel like you've heard the album before you've, well, heard the album. That is not to say that it is unpleasant to listen to, in fact that sonic textures that the Silversun Pickups create show a lot of potential for the Los Angeles band, but they might try to wander out of the shadow of their predecessors before that can really make a name for themselves.

Maybe the point where the Silversun Pickups went wrong was choosing a producer that also brought us albums by, well, Smash Mouth. Possibly finding a producer that might push the envelope a little more could have helped the Silversun Pickups reach their potential, but who knows? I mean, if Kennedy didn't choose LBJ as his VP, maybe he wouldn't have been shot on Texas. Who knows. Anyway, maybe the Pickups and I got off on the wrong foot. I digress. Carnavas opens with "Melatonin," a song that starts with a very Adore-era Smashing Pumpkins riff to the point you think you might be hearing Billy Corgan's vocals kick instead Brian Aubert's. The fuzzed out guitars and random vocal howls seem all well and good, but you can't shake the feeling you've heard this before. The same might be said for "Well Thought Out Twinkle," except flash yourself back to Gish. Luckily, "Checkered Floor has more of its own personality. The song is more restrained until the distortion-rich chorus kicks in with a shoegazer feel without copping the feel totally from a specific band. To a lesser extent "Future Foe Scenarios" and "Waste It On" follow this formula, but it has a little too much of a Bush feel to the song structure. "Dream at Tempo 119" is similar but seems to be able to stand on its own feet more effectively.

One of the real gems on Carnavas is "Lazy Eye", which first appearing on the Pikul EP. The song builds into a distorted frenzy slowly as the guitar, bass and drums twirl towards the howled chorus mid-way through the song. The song doesn't borrow as much other tracks on the album, and is likely the best representative of the real promise that the Silversun Pickups possess. They can be both delicate and ferocious in a 6 minute package and it is in their moments that they can be truly captivating. "Three Seed" is another song that captures more of the mellow side of the Silversun Pickups, with the guitars drifting across the low, rumbling basslines. The closing song, "Common Reactor" returns to the Smashing Pumpkins influenced sound, but has a lighter feel than their alt-rock ancestors, allowing for a little less musical de ja vu.

Carnavas is not a bad album. In fact, for someone who is less intimately familiar with 90's alternative rock, it could be a downright great album. However, for those of us who spent a little too much time listening to WFNX or WEQX (yes, New England!), Carnavas is a little to eerily familiar sounding for its own good. It does have its moments where you feel the band is beginning to break out, but they are a little few and far between on their debut. Carnavas might not be the most innovative album of the year, but it at least leaves us with glimpse into what could be a respectable future for the Silversun Pickups.