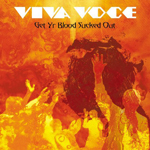 Get Yr Blood Sucked Out

Let's hear it for husband-and-wife duos! Woo! Of course, now that I mention it, the only ones I can think of off the top of my head are Mates of State, a couple of ex-wife and ex-husband duos (Quasi, possibly The White Stripes) and Johnny Cash/June Carter. But no matter! Truly, this shows a lack of them in the music scene; however, luckily for us, Viva Voce helps fill this void in my heart. Get Yr Blood Sucked Out (aawww, doesn't that just scream martial bliss) marks the third album for the Portland-via-Alabama band, and they've crafted an album full of dark rock & roll best heard late at night.

Get Yr Blood Sucked Out opens with "Believer", a blues-influences song that rumbles out of the speakers with thick, distorted guitars and a marching, handclap-driven rhythm that sets the tone for the album. The album turns back towards straight rock similar to the Breeders or Jucifer on "When Planets Collide," where Anita Robinson's languid vocals snare you, the listener, into the dark underbelly of the song. They could have left the song at that, but instead it takes a sharp turn about half way through, uncovering the song underneath the original, a gentler indie song that is born from the distortion of the opening 2 minutes. They venture more into Yo La Tengo territory on the sweet and sultry "Drown Them Out," where Anita's voice drifts up over the strummed guitars like the wind over a dusty prairie. Similarly, "Never Be Like Yesterday" has a decidedly Beatles feel to it without sounding Oasisific, instead it rattles with trilling guitar work and hushed vocals blending perfectly.

Some of the songs fronted by Kevin Robinson have a decidedly different tone, such as "From the Devil Himself," a song that is a less quirky version of Quasi or a hot and dirtier New Pornographers but features the most catchy chorus this side of "Hey Ya", except with the hand clapping you get the lyrics "Hey now/You're gonna get your blood sucked out". They also mix in some rather epic tracks, like "We Do Not Fuck Around" and "How to Nurse a Bruised Ego (Back to the Health)" that feel like equal parts Matthew Sweet, Flaming Lips and the Pixies all jumbled into one, with aggressively changing tempos and moods over the course of six minutes. This is balanced by short gems like "Special Things" that mix handclaps (ah, again, have I mentioned my love for handclaps?), woodwinds, echo-y vocals and gentle guitars.

Get Yr Blood Sucked Out is one of those albums that you can feel comfortable listening to the first time you pop it into your music player of choice. It has a familiarity to it without feeling to familiar. Viva Voce also seem adept at creating mini-albums within the albums that give the songs more depth than their typical sparse arrangements might normally reveal (being a duo, sometimes it takes a lot to build a musical presence). It might not be the best album you'll hear all year, but its probably one of those albums you'll go back to whenever you just want something you can throw on to sit back and enjoy.