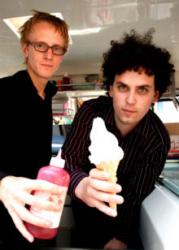 Simian Mobile Disco are your friends

That’s not just the name of Simian Mobile Disco’s best song, but it’s also their manifesto.

The band, perpetually on the road, brought their elaborate stage setup and 4/4 beats to Neumo’s Thursday night for quite the dance party. It didn’t start out that way, though.

When I got to the club, around 9:30, the posted schedule said SMD was to go on at 11:30 – which was very late for someone concerned about waking up for a day job the next morning I realized I’d have a lot of time to kill (and with having to drive home, not a lot of vodka to consume in that two hours). Also, with lots of hipster guys dressed in spandex unitards, my jeans and t-shirt made me feel damn near Republican. One guy (not in a spandex unitard) approached me and asked what I was doing with a notepad. Even though I thought the question was accusatory (what’s he doing here?), I asked myself the same question later.

SMD’s live show has quite an elaborate setup of gear for Jameses Shaw and Ford to spin records, push buttons, etc. Unlike Justice’s setup, I don’t have any doubt that everything is utilized and not just used for aesthetics. Ford and Shaw rotated around their synths and turntables clockwise, with Shaw’s back to the crowd for most of the night. They also liberally used strobe lights throughout most of their set.

SMD went through most, if not all, of the songs on their dazzling debut album, 2007’s Attack Decay Sustain Release, eliciting, unsurprisingly, the biggest reactions from the crowd when they spun their most recognizable hits (“It’s the Beat” and “Hustler” segued nicely into one another) but for the most part, the entire crowd (surprisingly, myself included) danced for the entire 70 minutes of their set. After writing down only the time SMD started (11:30pm), my notepad was blank. I put it away a few minutes into the set realizing that I wasn’t going to be able to take notes with everyone else around me dancing and reaching the conclusion that everyone around me was, at that point, having a lot more fun than I was.

Once I put the notepad away and could focus more on just enjoying the show, I did exactly that.

The show felt like what I presume a typical (but decadent) weekend night at Studio 54 was like in the 1970s. People dressed up (or down, depending on your ideology) for the occasion, danced all night and large number of attendees were, presumably, under the influence of controlled substances (although that’s no fault of Neumo’s or SMD). Once the music from SMD started, the show was a dance party sans any inhibitions or reservations (which was probably why that one guy was bothered that I had a notepad). Two very drunk (but very attractive) women that I’ve never met before even told me during “It’s the Beat” that they loved me – and for the duration of that song, I believed them. They did not play “Never Be Alone” – one of their original singles from when they were just “Simian” (made even more famous when Justice remixed it and renamed it “We Are Your Friends”) but that spirit was prevalent throughout the club, which was packed (but I think only very close to being sold out).

It was a care-free night that I think everyone enjoyed. Once SMD took the stage, I stopped worrying about work the next morning or what time I would get home. The music was addictive and catchy (I think SMD’s singles are much catchier than “D.A.N.C.E.” or any other song Justice has made, for example) and people wanted to dance this Thursday night – and they did.

It wasn’t about the club or the costumes or the drugs people were on that made it enjoyable for everyone. It was the beat.