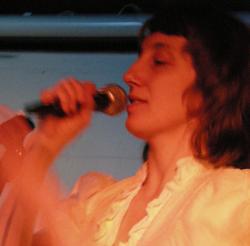 The Blow at Pacific Lutheran University

It's safe to say Pacific Lutheran University is not what you call a place hipsters and indie music enthusiasts like to flock. That aside, a friend and I have been involved with starting up an organization on campus geared towards bringing local and independant acts on campus. So far, as one could imagine, turnout hasn't been anything to write home about.

That was until we got The Blow to play…

Yes, Khaela Maricich graced our private school campus last night, dancing along to backing beats, telling background stories about nearly all her songs, and being overall a quirky, loveable goofball.

Maricich played to a crowd of 50+ students in the small, lounge like venue, the Cave. A majority of her performance consisted of Paper Television tracks (sans Jonah Bechtolt), as well as a few off Poor Aim: Love Songs.

She also did an improvised accapella take on "My Sharona" which shouldn't go without noting, as well as ending "Hey Boy" with James Taylor's classic, "Fire & Rain."

Though somewhat reserved and mild-mannered off-stage, Maricich beamed with confidence and energy once the stagelights came on.

Maricich ranted about songwriting: writing songs about the universe, attempting to write positive "in the moment" love songs, and her analyzation of romantic songs picked by people on karaoke nights.

Her creative self even managed to encorporate a clear plastic sheet and water bottles into her performance. There was also mention of her aspirations to be as good a dancer as gay men.

Thanks to her VH1 Storyteller-esque performance, I was able to realize how deep her songs really go — much further than their peppy exterior might lead you to believe.