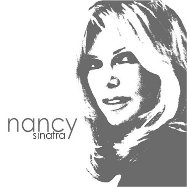 It's certainly not every day that you are abruptly awakened to the sound of Morrissey pounding on your hotel door. I can only imagine Nancy Sinatra's shock as she stood frozen in her door, curlers and mud-mask abound; the one-size-fits-all hotel bathrobe bunching awkwardly around her now past middle-aged mid-section. To anyone who has followed Morrissey over the years, his sincere adoration of the boot-clad vixen was never secret. And, after Quentin Tarantino breathed new life into Sinatra's sultry pipes, giving her front seat on the Kill Bill Vol. 1 Soundtrack, I imagined it was only a matter of time before the daughter of Ol' Blue Eyes would make a major resurfacing in some fashion…but who would have ever guessed that the outcome would be so damn delicious?

Most born after the sexual revolution (including yours truly) know Nancy Sinatra primarily for her 1966 mega-hit "These Boots Are Made for Walkin," which has since overshadowed her career, but what many fail to realize is that Nancy was no one-hit-wonder. In fact, Ms. Sinatra hit the charts an astounding 22 times! That, in addition to her appearance in more than a dozen film and TV productions, qualifies her as a bona-fide American starlet…well, along with being the famous rebel daughter of Frank Sinatra and marching at the forefront of the women's liberation movement.

But back to the present…after convincing Ms. Sinatra that he was indeed not a deranged stalker (mostly), and enjoying a nice cup of herbal tea together, Morrissey quickly went to work gathering some of his favorite songwriters in modern music; Joey Burns (Calexico), Jon Spencer (Blues Explosion), Jarvis Cocker (Pulp), Thurston Moore (Sonic Youth), Steven Van Zandt and Bono were a few of those selected. Together with Nancy, her daughter (AJ Azzarto) and son-in-law (Matt Azzarto), they performed a bit of magic.

All too often an attempt to remake an aging former pop-star turns sour as they are pushed and twisted into small, uncomfortable spaces…and let's be honest — it's always a little embarrassing to witness your parents trying to be "hip." Not so with this. Guided by the loving and careful hand of Morrissey, each song embraces Nancy's capabilities and style…and my, what capabilities and style she has! The years which have passed since the spotlight shone upon her blonde beehive coif have done little to fade her powerfully sexy voice. Like a fine wine, as the cliché goes…

All the tracks on this self-titled LP offer something unique, but the one's which stand out most are 'Burnin' Down the Spark' (Joey Burns) which features Joey's signature Southwestern guitar and horn-section style, 'Don't Let Him Waste Your Time' (Jarvis Cocker) which sounds like it could have been written at Sinatra's peak, and the A-tonal 'Momma's Boy' (Thurston Moore), which showcases Nancy's ability to mold herself into less conventional directions. But, beyond these shining moments, the truly jaw-dropping moments happen on 'Let Me Kiss You' (Morrissey) where Nancy not only delivers the song with class and style, but literally takes on Morrissey's demeanor and subtle vocal characteristics in so doing. The final grand moment happens at the end of the record with 'Two Shots of Happy, One Shot of Sad' — a song originally written by Bono for Frank Sinatra, but never recorded until now. The spirit of Frankie moves through his daughter as she reverently delivers this song in a way that only someone with that particular bloodline could. Not only is Nancy singing a song that her daddy would have undoubtedly loved, but she is paying a moving tribute to him in the process.

{This review originally ran in Bandoppler, a kick-ass Northwest publication that you should definitely check out…}