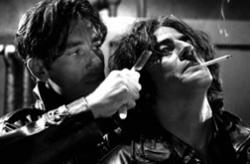 Not that you'll ever catch me accusing a movie studio of restraint, but within about 10 minutes I could see why. This isn't a film for everyone. Like the graphic novels on which it's based, Sin City is pretty graphic. The stories are fairly recognizable noir archetypes (the cop outside the law, the thuggish vigilante avenging the weak, the hookers with hearts of gold), but there's no Hayes Code gloss to soften their deeds.

The picture interlaces three stories (plus a little bonus at the beginning, reportedly directed by Quentin Tarantino) from Frank Miller's graphic novels of the same name. Each, in its own twisted way, is a love story, or at least a story of what a man might do for love. The story that bookends the picture follows a tired old cop, played by Bruce Willis, a mere one day from retirement, as he strives to protect an 11-year old girl from a serial rapist who's also the son of a powerful senator. In the second, my favorite, a big ugly mug named Marv hunts down a mute cannibal serial killer after the killer helps to frame Marv for the murder of the prostitute who gave him the best night of his life. And in the third, a stoic cool cat, played by cool cat du jour Clive Owen, goes after a sadistic greaser and his greaser entourage who are terrorizing his current girlfriend. Along the way, he teams up with his ex-girlfriend and her pack of grrrl power prostitutes as they try to protect the fragile supremacy they hold over their turf.

Director Robert Rodriguez, best known to adults from the El Mariachi pictures and to children from the Spy Kids franchise, carefully translated the novels for the screen, both visually and narratively. The dialogue and voiceovers are faithfully recreated, word for word, and even the camera angles mimic exactly the points of view from each panel in the story. This works better in some cases than in others — ultra-stylized angles sometimes look needlessly self-conscious when movement is added — but it's riveting throughout, even when the story gets a little boring.

Overall the visual achievement is truly extraordinary. Like Pleasantville's demented offspring, Sin City flashes only tiny sparks of color. Clive Owen's red sneakers, the sickly jaundice yellow of the diseased rapist's skin, sweet innocent Alexis Bledel's big blue eyes, all serve as stark punctuation against a ruthlessly black-and-white canvas. And Rodriguez largely avoids using the punctuation gratuitously, though it must have been a sore temptation. Style over substance, yes, often, but the style really is extraordinary.

If nothing else, though, Sin City is a tremendous testament to the power of a good performance. On its own steam, the film barely bothers to engender sympathy for any of its characters. Again, style over substance, and it's a fair charge. Even the obvious ones take a while to warm up. I mean, Bruce Willis as a cop one day from retirement? That should be a gimme. But it's not entirely clear until well into the story that he really is, so to speak, the good guy. In Sin City, what distinguishes the heroes from the villains is the degree of good intention they bring to their wicked deeds, so it's up to the actors to get you to care, and if they don't do a good enough job, you don't.

The gold standard is Mickey Rourke as Marv, a titanic, blocky figure who appears to be roughly impervious to all but the most extreme physical harm. As in, getting hit by a car is no more than an momentary inconvenience, and getting shot multiple times only slows him down. So it's a gimmicky character, and Rourke could easily have coasted on the plot, makeup, and pulpy dialogue ("When his eyes go dead, the hell I send him to will feel like heaven after what I've done to him").

Instead, Rourke brings warmth and sympathy to the role, striking a delicate balance between brutality and humanity, between pathos and humor. (Note to the studios: I'd love to see this performance parlayed into a John Travolta-after-Pulp-Fiction-style comeback [though naturally without the Battlefield Earth vanity-project phase]). His ballsy, nuanced performance lends gravity to a story that could easily have been little more than a ho-hum vicious tear of vengeance.

Rourke shares some glory with Elijah Wood in his sequence. Wood is fabulously creepy as the demented serial killer in Converse Chuck Taylors, an argyle sweater, and eerily reflective glasses. It was a brilliant bit of casting to get those big Frodo eyes working on the side of pure evil, and Wood plays deliciously on his innocent looks, like a character from The X-Files who only Mulder would realize not to trust.

The other stand-out performance is Benicio del Toro as Jackie Boy, a macho asshole with an entourage of asshole thugs and a dangerous secret. Clive Owen's not bad as the sequence's hero, though his accent does creep in at inopportune moments, but del Toro is a sadistic delight, exploiting the black humor his character stumbles into to tremendous effect. At first I thought I was just tripping because I think it's the first time I've ever really seen his eyes, but naw, it's more than that. He was funny as hell.

By and large, the women perform well in a myriad of roughly interchangeable service industry roles. Whether you like any of them will depend largely upon whether you're a fan of the I'll-exploit-myself-before-they-get-a-chance-to-exploit-me model of feminism, but all are certainly extremely hot. Rodriguez favorite Carla Gugino in particular takes a noble stab at transcending the fact that she happens to be nearly naked in all of her scenes, and Jessica Alba shows some real sweetness and toughness as a damsel in distress. But they all fit in nicely with the true draw of the movie, which is the visual spectacle. Sin City may or may not be a movie you'll enjoy watching, but it most definitely is a movie worth seeing.