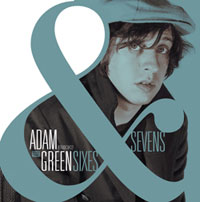 As half of The Moldy Peaches, Adam Green has been mastering loungy, lazytime delivery with a bit of a car-salesman smirk permanently affixed to his face since the mid '90s. Sixes & Sevens, his fifth solo album since parting with Kimya Dawson around 2002 is no exception. Although there has been a recent explosion of interest in the former Peach after the prominent inclusion of "Anyone Else But You" in the sleeper hit film Juno, Green's latest is just as steady and experimental as most of his earlier work. There has been a modest increase in the radio-friendliness of the lyrics, but that may have just come with age rather than as a strive for commercial success.

Sixes & Sevens is full of light, enjoyable, stream-of-consciousness experiments which hit dead center at least as often as they misfire and even the less interesting songs have enough personality to overcome complete dismissal. The arrangements are a bit denser and fuller than much of Green's earlier work, but the delivery is still very Vegas with some fake soul and speak-rap — perhaps equal parts Tom Jones, Engelbert Humperdink, Elvis, and William Shatner.

Although this may not sound appealing, Green makes it fun and light with occasionally thorny, but never offensive lyrics to shake things up. The album bends genres rapidly while maintaining commonality in the overall sonic density and vocal delivery.

Sixes & Sevens opens with "Festival Song" and a row of soul-choir "ah-ah-ahs" and then follows up immediately with the catchy, warped ode to Jimmy Buffet, "Tropical Island" tossing out quick nonsense rhymes like:

The genre-switching sounds breakneck on paper, but it is somehow hardly perceptible when listening. After Green's visit with Jimmy Buffet, the album continues with the toss-away snap-jazz-to-slow-punk "Cannot Get Sicker" and the silly atonal poem "That Sounds Like A Pony." Following that, there are a couple of smooth-70s winners with horns and funk bass and then it just keeps getting weirder.

"You Get So Lucky" is a cowboy carnival tune, "Getting Led" is a beautiful, almost serious ballad, and the album's best "Drowning Head First" is an off-kilter duet which is remarkably reminiscent of "Anyone Else But You" in both content and delivery, but better. After that, Green keeps bouncing around in generally the same areas with a sprinkling of great, melodic songs including Velvet Underground ode "Be My Man."

Overall, the songs are smooth, catchy, and fun. With only a couple of real skippers out of the 20 two-minuteish tracks, Green has a high hit percentage on this one. The lyrics, usually a listening focus of mine, are essentially junk-speak silliness, but they toe the line between fun and stupid just enough to make the whole thing work…as long as you don't pay too much attention to Green's vivid imagination: