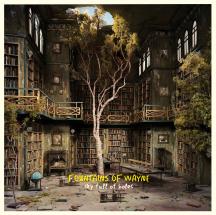 More than a great percentage of people I’ve met, I’m someone who likes things I can count on. This might explain everything from why I’ve worked only two jobs over the past decade to why I always pack my cigarettes exactly eight times. OK, “I’m nuts” might be a better explanation for the latter but I digress.

With all this in mind, Fountains of Wayne are, in many ways, the perfect band for someone like me. They figured out early on what they were good at and stuck to the script. When a new FoW record drops, you’re guaranteed to be treated to flawlessly constructed pop songs with tight yet exceedingly simple arrangements. They’re the most reliable three and a half minutes in rock n roll. Suffice to say, Sky Full of Holes continues in this vein.

That said, FoW’s fifth full length is hardly a carbon copy of their previous catalog. Most notably, they’ve dialed back the punchy electric guitar approach that has been something of a staple. Sky Full of Holes relies much more on mid-tempo, largely acoustic backdrops. About half way through, I found myself thinking a lot about The Get Up Kids. In particular, how Kansas City’s finest followed a half decade of fast paced power pop with the Scott Litt-produced On a Wire, which seemed to boast nary a distorted guitar. And after hearing SFoH a few times through, this comparison seemed even more apt. In both cases, while the arrangements were a departure, the songwriting aptitude remained essentially the same.

Lead track “The Summer Place” shines with Beatles circa Help! swagger and features a protagonst who feels nostalgia for a time in her life that most would surmise actually kind of sucked. Among their many virtues as storytellers is FoW’s ability to create a sympathetic identity for a character within the space of just a moment or two.

“Someone’s Gonna Break Your Heart” earns a spot among the very best Fountains of Wayne singles. It’s the latest in a parade of Chris Collingwood-penned gems fully deserving of a Top 40 status it’s unlikely to attain. This is also the moment where the band come closest to their vintage sound.

Fountains of Wayne have always emphasized emotion and melodic content over, say, cerebral lyrics. “Hate to See You Like This” is a good example. It boasts a lovely, aching melody that  nullifies the fact that the lyrics could have been written by a less folksy, more compassionate Dr. Phil.  Besides, Dr. Phil’s songs are shit.

While Sky Full of Holes isn’t quite as consistent on a song-by-song basis as FoW’s first two LPs, it stands up well against their output over the past decade. As this disc illustrates once more, heartfelt simplicity almost always trumps unnecessary complexity. If you disagree, I’ve got a milk crate full of Rush records you might enjoy. Otherwise, I invite you to bask in the glory of Sky Full of Holes. It’s proof positive that Schlesinger and Co. remain craftsmen of top-shelf pop songs.